Observation Notes:
This was a great night to observe Mars. A dust storm has been brewing in Chryse for the past few days, and I wanted to try and catch it in the act. When I made my first observation of the evening at OCT 22, 2005, 05:30 UT, the central meridian was about 15Â° with the slender point of Margaritifer Sinus flickering in and out of view. Very prominent in the south was a cloud band swooping out of the morning limb and flowing along the southern side of Mare Erythraeum. I wasn’t sure if this was just some heavy condensation cloud activity, or part of the dust storm. The North Polar Hood was prominent, and notched. 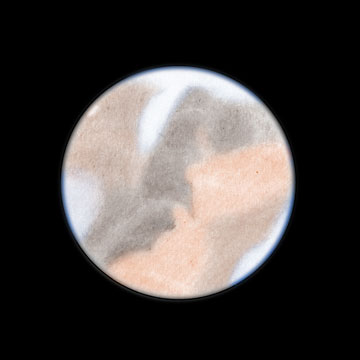 A few hours later at OCT 22, 2005, 09:00 UT, I pulled Mars up again at CM 65Â°, to see a very bright spot a bit southwest of where I expected the storm to be. It was covering the eastern edges of Solic Lacus, and seemed to be feeding into the southern cloud band I had seen earlier. The #80A blue filter confirmed these bright spots nicely. I did not detect yellow coloration in this atmospheric phenomenon–instead, it appeared white. Still, the overall effect was colorful with oranges, dark green-grays, whites and blue-whites. 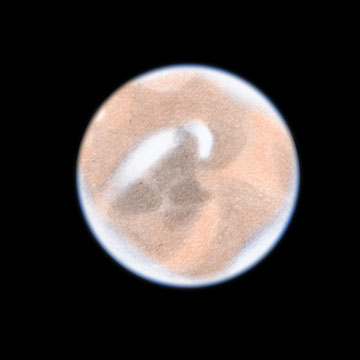 I consider myself to be out of my league when it comes to planetary astrophotography, but I couldn’t resist giving this beautiful sight a try. These two images are what I ended up with. The first is a single shot that miraculously came out recognizable using eyepiece projection on my Canon 300D. I think it does a good job of showing the blue limb haze I was detecting visually, and it shows the billowing storm. But overall, it’s really soft.. 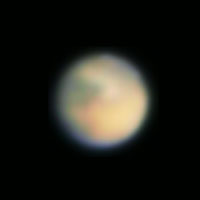 The second image is a stack of about 15 hand-held shots taken through the eyepiece. The northern limb haze isn’t showing up at all, but I think it’s a more detailed view, and corresponds pretty well with what I ended up sketching. 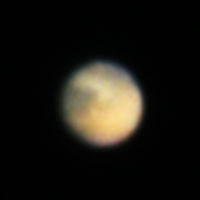 I’m hopeful that the dust storm won’t engulf the entire planet, but whatever it ends up doing, it was nice to catch it while it was young. Meanwhile, a couple blocks away, the cement factory was brewing up a dust storm of its own. What a luminous travesty. 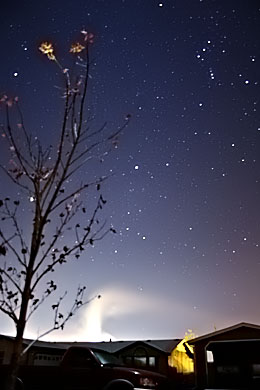