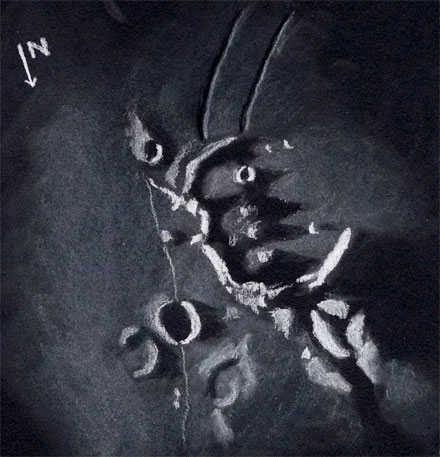 Wind wasn’t a problem this evening like it has been recently, but the seeing was still driving me crazy. It just wouldn’t settle down for more than flickers of the eye. Hippalus was right on the terminator, and the rising sun was changing the scene rapidly over the course of the hour-long observation. Jagged shadows sank their teeth into the western half of the crater. One long rille ran to the east of Hipparcus, and another two ran off the south end. I tried my hand at white on black sketching. I really need to work on my technique, but it definitely has some benefits that I want to explore further. I did this sketch on smooth black paper that looked really promising for DSO sketches, but it didn’t have enough texture to readily hold on to heavier whites. So the lunar maria to the east should be gradually brighter than it actually appears here.

Factoids:
Hippalus is a crater remnant on the eastern side of Mare Humorum. The southwest rim is conveniently missing, making it appear as a bay on the edge of Humorum. A rille of Rima Hippalus runs through the middle of the crater from north to south. The half of the crater east of this rille is rugged, while the other half is smooth. While the rille within the crater isn’t visible in my sketch, the difference in terrain is.