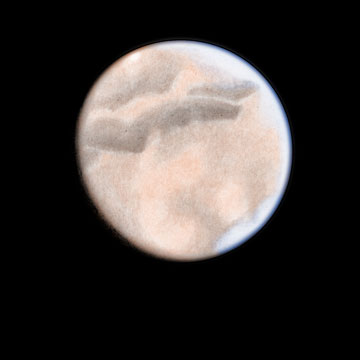 Observation Notes:
I really can’t seem to catch a break with the gusting wind during these Mars observations. I have to keep trying to time my sketching with the seemingly endless moments when the planet is bobbing around the eyepiece like a face-on view of somebody playing paddle ball. Bleh. I wasn’t initially as excited about the terrain at CM 195°. But there was some tantalizing detail in the northern hemisphere. The South Polar Cap was incredibly difficult to spot, you know, what with all the jiggling from the wind and all, but it was intermittently visible as a very tiny white speck. The North Polar Hood was prominent and slightly blue. It appeared to have either an indentation, or else a dark feature was showing through strongly in the middle of it. Limb haze bled into Hellas and Libya. In the southern hemisphere, that haze in Hellas seemed to bleed softly into Eridania and Tyrrhenum as well. Mare Sirenum and Mare Cimmerium seemed to blend together, even though the Sky and Telescope albedo map I refer to shows them as being widely separated. I wasn’t very pleased by how I rendered these dark features. They look too artificial. The northern hemisphere actually turned out better, and I was able to make out Nodus Alcyonius and Trivium Charontis.