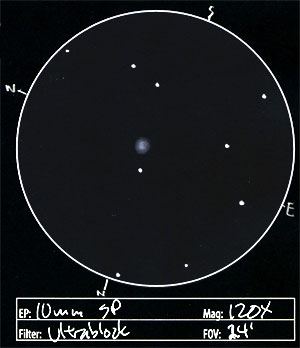 What an unbelievable planetary nebula. It was very bright and detailed. It rested about 2′ south-southwest of a bright star. It was circular, and had a brighter circle within. This inner circle hinted at more detail. So I bumped the magnification up from 120X to 240X, and it did very well. The central circle was mottled and perhaps roughly triangular in shape. After removing the Ultrablock filter, a central star appeared. It seemed like the star may be a bit north of center. I didn’t realize this was the Eskimo Nebula until after the observation and I was double-checking a reference in the Bright Star Atlas. It’s a beaty, that’s for sure. I cought it just as dawn twilight was brightening in the east. It was a great way to end the night’s observations.

The double-shell morphology of NGC 2392 helps contribute to it’s entrancing appearance. The nebula’s visual magnitude is 9.1, and it’s central star, HD 59088, has a visual magnitude of 10.5. The distance is not well known, but has been estimated at 3000 light years. It was discovered by William Herschel in 1787.