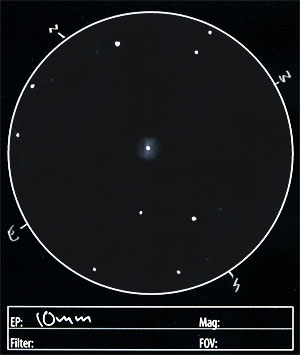 This was a large, planetary nebula with a bright central star. Using the Ultrablock filter helped verify the nebula, and show it off better. The nebula was circular and centered on the main star. It seemed like there was a bright axis running northwest to southeast through the center of the disc. As I made the observation, a beautiful crescent moon was rising in the midst of a massive zodiacal light.

NGC 1514 was discovered by William Herschel in 1790. This planetary nebula caused him to reconsider his earlier assumption that these objects consisted of unresolved stars. The gas near its center is expanding outward at about 25 km/sec.