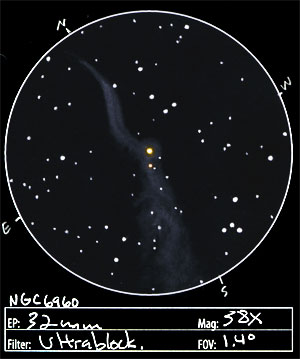 This was my first view of the Veil Nebula through my own telescope. I wasn’t sure what to expect.

The western arc, NGC 6960, was my favorite. A brilliant yellow-orange star,52 Cygni, blazed at its heart. North of this star, the nebula condensed to a point and appeared smoothly striated. South of the star, the nebula broadened and became more mottled, as though the star was a stone breaking the surface of a swift flowing stream, throwing eddies into the downstream current. I subsequently read a report on the Skyhound site’s Veil Nebula page that referred to the shape as a squid. I can clearly see that squid now, scuttling through inky water, it’s great glowing orb of an eye staring back at me.

The eastern arc of the nebula, NGC 6992/5, was broader, more mottled and complex. In a way, it looked like the great curved arm of a Barrow Wight reaching, stretching to the south where its fingers curled around some unseen prize. The arm would be NGC 6992, and the hand would be NGC 6995. There appeared to be a fainter arc to the west, running roughly parallel to the southern half of the nebula as seen in the eyepiece. Some of that fainter parallel nebulosity is real–the far southern portion. But as the rollover graphic shows, I saw some mists that really aren’t there a little further north. Perhaps I was catching some reflections in the eyepiece, or making more of unresolved stellar groupings than was really there. I did let the scope get into an uncomfortable viewing angle by the time I began this sketch, and didn’t want to waste time repositioning it.

Factoids:
The Veil Nebula is part of a large nebula complex known as the Cygnus Loop that lies 1500 to 2500 light years away. These filaments of glowing gas are the result of a supernova that exploded anywhere from 5,000 to 30,000 years ago (depending on what your source is). The deceased star shone as bright as a crescent moon in the sky as it blasted its outer shells of gas into space. This expanding shockwave now covers 3ï¿½ of the sky–as wide as 6 full moons. As this shockwave collides with interstellar material, it ionizes the matter and generates the beautiful glowing shell we see today.