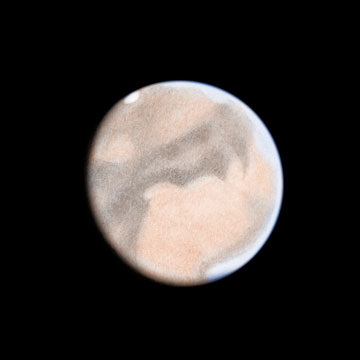 Well it keeps getting better and better. I viewed Mars earlier in the evening, and the regions east and west of Syrtis Major gave the rough impression of a 6-legged insect. By the time I made the sketch though, Syrtis Major was hovering near the evening terminator. If not for the wind gusts, the view would have been outstanding. I started the observation without filters, and there was plenty of detail to see as-is. The South Polar Cap was very tiny. Hellas was evident in the southeast. The sharp edge of Sinus Sabeaus was the most eyecatching feature. Sinus Meridiani and Margaritifer Sinus made nice points in the west. Limb brightening and the bulbous North Polar Hood were evident without filters, and were the first view I’ve had so far of either of these features. The #21A Orange filter helped confirm some darks within darks. The #80A blue filter showed much brightness on the western limb and helped verify the knot of Argyre. The wide intrusion of Chryse was evident without filters.