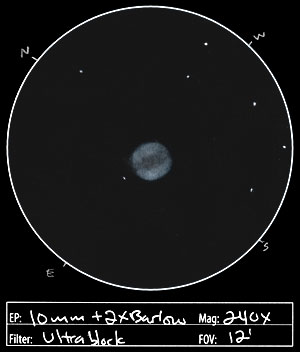 This was my second observation of M57, a year down the road. At 38X it was a distinct oval amidst pinprick stars. It was evident to me that it was not colorless, but possessed a subtle smoky blue color that verged ever so slightly toward green. At 240X, without the filter, it was elongated east-northeast to west-southwest and thickened around the perimeter like a red blood cell–except not red =) The northeast and southwest ends had less of a rim. The south rim seemed brighter. The north rim had a mottled appearance. With the Ultrablock filter, the north lip seemed brighter at its outer edge. But the filter was not a vast improvement for some reason.

The Ring Nebula is the expanding shell of gas emitted by a dying parent star. It is believed that this shell of glowing gas is actually in the shape a torus (donut shaped) or a thick cylinder, and not a spherical shell as I had assumed. This means our view of the star is from one of its polar regions. The central white dwarf star ionizes the gas in the shell in stages, with the most energetic radiation showing up closer to the star. The innermost region appears dark because it is emitting its light in the form of UV radiation. As you go further away from the center and ionizing radiation decreases, greenish light begins to dominate as it is emitted by ionized oxygene and nitrogene, and then you get to the outer edges where only hydrogene gas can be excited to emit red light. These colors are visible in decent astrophotographs, but not to the visual observer…at least not through my scope.

M57’s distance from Earth is widely estimated from 1400 to 5000 light years, with a recent estimate of 2300 light years from the US Naval Observatory. Based on the rate of expansion of the nebula, it’s estimated that the shell of gas began to peel away from the dying star 6000 to 8000 years ago, and the main body is now .9 light years in diameter. It was the second planetary nebula to be discovered, and was found by Antoine Darquier de Pellepoix* in 1779. (M27, The Dumbell Nebula was the first). It turns out that the planet-sized white dwarf in the middle is a difficult target even for large telescopes, and even then only visible under exceptional conditions. M57 is moving in this direction at about 21 km/sec.

*How’s that for a name you’ll never be able to remember? 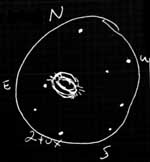 M57, The Ring Nebula, is one of the most famous, and easily spotted planetary nebulae. It can be found between two close stars in the constellation Lyra. It’s these marker stars that make it easy to find. As I observed it, it conveyed itself as an obviously oval nebula, elongated ENE to WSW. It showed a hollowish center. The 240X view showed the narrow ends as appearing thinnest with these tips being softer in appearance than the longer sides. It seemed a bit like a poof shooting out of opposite ends. Although I hunted for it, I couldn’t detect the central star that I know is there. I didn’t recall associating any color with it. Particularly since I observed it at high magnification, it came across very dim and gray.