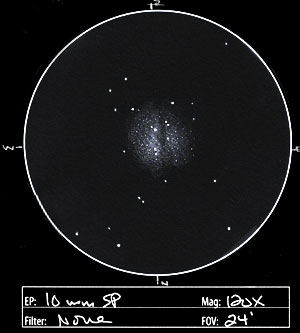 I regret not making this observation at a better time of year and from a better location. Scorpius was headed into bad light pollution as seen from my home, and the neighbors were kind enough to shoot on the porch light as soon as I began the observation. The cluster was huge and granularity popped in and out across the surface and fringes. The LP made it less of a spectacle than it really should have been. The north side seemed to have a harder edge and it seemed to be elongated north-northeast to south-southwest with a ridge running across it from north to south. The ridge appeared bright on the west side and darker on the east. There seemed to be an interesting number of double stars anchoring its core. The visible extent seemed to be about 6′, although I’m sure its much more than that.

M4 lies about 7,200 light years away, and is one of the closest globular clusters. It displays a bar-like structure that runs through its center. The bar consists of 11th magnitude stars, is 2.5′ long and runs at a position angle of 12°. The cluster is obscured by interstellar matter, and so is dimmed greatly. Deep photography reveals a diameter of 36, equating to 75 light years’, whereas its visual diameter has been estimated at 14′ (quite a bit larger than my estimate of 6′). At Class IX, it is one of the most open of globular clusters, with a half-mass radius of 3.65′ or 8 light years.

M4 was discovered by De Chéseaux in 1745-46 and subsequently catalogued by Messier in 1764 who resolved it into stars. It was the only one he could resolve, calling it a “cluster of very small stars”, and so was the first globular ever resolved into stars.