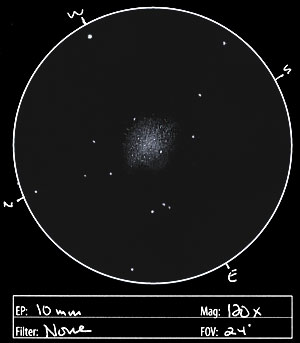 Granularity resolved nicely on this cluster. The core was not distinct. There was just a subtle brightening toward the center. Overall, it was circular, but some regions in the center seemed to extend north-northeast to south-southwest. It’s visual extent looked to be 3.5′. There was some extra mottling to the east and south.

M10 lies 14,300 light years distant and has an extent of 20′, or 83 light years. Visually it can appear 8′ to 9′, which is much larger than my 3.5′ estimate. According to Mallas, its central region appears pear-shaped with a grainy texture, with the outer regions showing brighter knots at magnifications around 120X. It was discovered by Charles Messier in 1764 with William Herschel being the first to resolve it into stars.