Before tonight, I’ve never witnessed the shimmering plume of a distant rocket launch. I’ve seen pictures on the news and in print of the spiraling, swirling, opalescent clouds the rockets leave behind, but I’ve always wanted to see it for myself.

Well today, I got an email, forwarded by the Coconino Astronomical Society, about a rocket launch scheduled for 7:26 PM local time from Vandenberg Air Force Base in California. I was heading out with the family to grab some burgers at Bunhuggers, because the kids were having a major craving, and I’m not saying I wasn’t sharing the craving, but they were the instigators I’m telling ya. The timing worked out so that on the way there, we drove up to a parking lot atop Switzer Mesa near Buffalo Park and the USGS offices. We told the kids we were going to look for a rocket launch. I really didn’t know what to expect. I figured that if it was visible, the thin trail of rocket exhaust would gradually shimmer into view, and then twist around from high altitude winds and such. Since I thought it would be a slow, gradual revealing, I wasn’t hurrying too much with the camera. I should have hurried. I was not at all prepared for what actually happened.

As I was clipping the camera to the tripod, I heard Amanda exclaim “Woah! There it goes!” As I looked up I could see a brilliant yellow-orange horn arcing up over the treetops. It gave the impression of a streamered firework shooting up from a nearby pyrotechnics display. As it began to clear the treetops, the trail of blazing gas began to throw off a beautiful, translucent shell that expanded rapidly outward. Then it suddenly shut off. A couple seconds later, it picked up again, but expanding outward even faster–this must have been the next stage of the rocket lighting up. About this time, the kids were gasping “Woahhh”…”That is SO COOOL!” while I had a few choice words myself. Second by second, the needle tip of the rocket plume accelerated southward, edging beneath brilliant Venus, with the rippling plume billowing out behind it. I’ve never seen anything like it. I was most surprised by how fast the entire structure expanded. The launch was at least 400 miles away, so it absolutely boggled my mind that I was actually seeing what I was seeing. 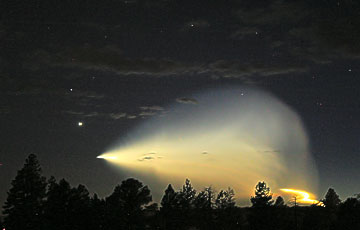 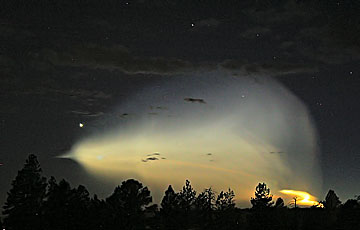 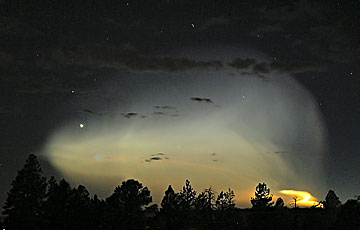 Gradually, the racing dart of the rocket disappeared, as the batteries in my camera ran out (:P) While I struggled to replace the batteries in the camera, the plume expanded into a dome that covered a huge portion of the western sky. 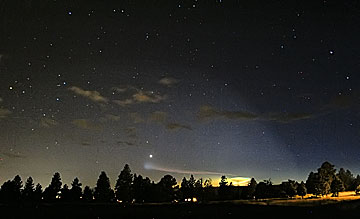 Closer to the horizon, that first brilliant streamer was getting twisted into a spiral shape and shimmering with rainbow hues. 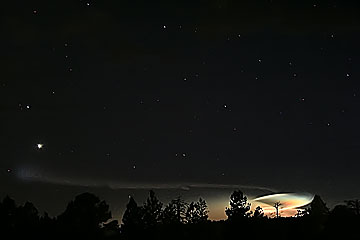 As we were getting ready to leave, a family drove up from the park further down the road. They asked what it was we had all just seen, and we told them about the launch, and offered to email some photos to them. It was one of their children who first noticed it, asking them if it was the Northern Lights.

After checking the Vandenberg Launch Site, it seems that we saw the switch from the second stage to the third stage, with the first stage only being visible within a couple hundred miles of the launch.

Move mouse over the above image to view labels.
[Note: Flagstaff, AZ is located at 35.14 Latitude/111.63 Longitude]

I’ll definitely be keeping my eyes peeled for any future launch schedules. The camera batteries will be fully charged, and I’ll be ready for the first few seconds that I missed shooting. Honestly, it would have been perfect for the video camera too, it was that bright and fast.

Here is a link to a gif animation of the launch.

Here are links to some excellent photographs and a video of the launch:
Skyscapes photos
Fred’s Astronomy Stuff photos
Video by Andrew Rozendal