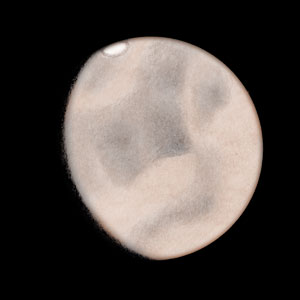 Observation Notes:
This was my best view of Mars yet. I made out obvious detail in the northern hemisphere, which turned out to be Mare Acidalium. The dark peninsula of Aurorae Sinus was the most prominent feature. It swept to the southwest, condensing into Mare Erythraeum. Solis Lacus was separated from Erythraeum by a light region. A dark feature drooped north from the SPC. I think this dark feature may be part of Mare Australe. Aurorae Sinus and Mare Acidalium swept to meet each other at points like a stalagmite and a stalagtite. For the record, gusting wind really ticks me off >:(