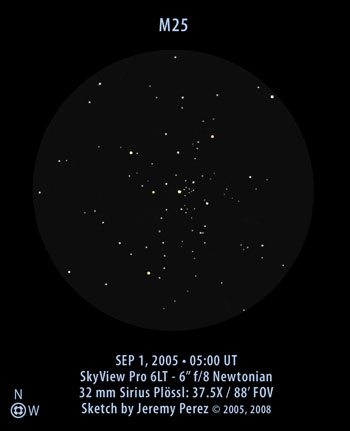 The above sketch is an update to the original to clean it up, scale down fainter stars, and update formatting. The original and comparison rollover are shown below. 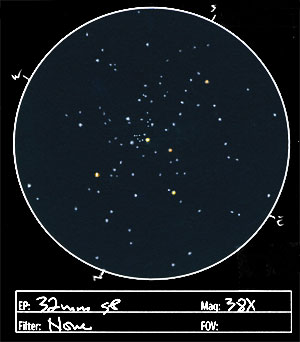 When I first pulled up M25, I was expecting to find a globular cluster. (Poor attention to symbols in the Bright Star Atlas.) So when I slewed to the appropriate location while gazing in the eyepiece I thought, that ain’t no globular…what gives here?…ahhh that was a dotted circle in the atlas… So I prepped myself for a different sort of sketching project–sorry blending stump. The open cluster appeared fairly sparse (you know, compared to those monsters in Auriga), and it was irregular in shape. A few yellow and yellow-orange stars added some character. At the beginning of the observation, it was in a fairly decent position and I noticed a faint sprinkling of Milky Way stars as a backdrop, but by the time I was done, it was moseying into the hideous light pollution to the southwest of my house and that speckled backdrop was gone.

Depending on whether some brighter stars were members or not, it was elongated north-northwest to south-southeast with a length of about 40′ in that direction, and a width of 25′ in the other direction. It did have a tight condensation in the center, just northwest of a bright yellow central star that turned out to be a cepheid variable star called U-Sagittarii. This region was about 3′ across. A bent streamer of stars trailed off to the south-southeast. There was a close, beckoning double-star about 3′ southwest of U-Sagittarii. If you move your mouse over the sketch, I’ve overlayed an astrophoto from NOAO (an awesome resource, by the way). It verifies some of the star colors I noted in the sketch, and matches up pretty well in the core of the cluster. As you move further out, it appears that my accuracy gets pretty lousy–actually, I think my outside scale is probably good and I just sketched my core too large. Anyway, I think it’s an interesting comparison of visual vs. photographic.

Object Information:
The region of M25 contains two type M and two type G giants. The G stars are members of the cluster. It also contains a Delta Cephei variable star (U Sagittarii) with a period of 6.74 days. This Cepheid is a member of the cluster. The presence of this variable star backs up the the fact that this cluster is not young, and may be about 90 million years old. The fact that M25’s distance can be measured by other means helps to nail down the Cepheid distance scale that is used to gauge the distance to nearby galaxies. That distance is about 2000 light years. Archinal and Hynes (2003) give a larger distance of 2300 light years. How such a discrepancy can allow U-Sagittarii to serve as a Cepheid benchmark is a little beyond me. Depending on which distance is used, and whether the diameter is pegged at 32′ or 26′, the diameter of the cluster is anywhere from 17 to 19 light years across. Ake Wallenquist recorded 86 probable member stars in 1959. More recently, Archinal/Hynes have given a much larger number of 601 stars. My sketch seems to put about 59 stars in the cluster depending on where its boundaries lie.

M25 was discovered by Philippe Loys de Chï¿½seaux in 1745/46. Charles Messier entered it in his catalog in 1764. For some reason, John Herschel did not include it in his General Catalog, so it does not possess an NGC number and is known instead as IC4725.