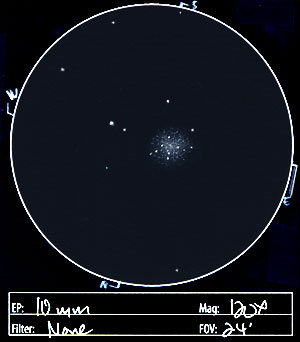 This was a rewarding cluster to observe. It was a pleasant sight at 38X, 120X, and 240X. At 120 and 240 X, it began to resolve into stars along the edges. Several were constantly visible, with many more forming a granular splat just east of a bright 8.6 mag star (SAO 190531). A couple seeming appendages sprayed off the north and northwest sides, consisting of at least 4 stars for the northwest streamer and at least 2 stars for the northern one. The core verged on stellar, but not quite. If I had sketched at 240X, I could have done a better job plotting star positions across the surface, but there wasn’t time for a second sketch (rising moon). It was circular overall, but seemed to have a flat edge to the core region along the south side. I estimated it’s visual extent at 3′.

It was first discovered by Charles Messier in 1764. William Herschel first resolved it into stars in 1784. The 2 streamers of stars that jumped out at me during the observation were also noted by Herschel: “Towards the north, are two rows of bright stars 4 or 5 in a line.”