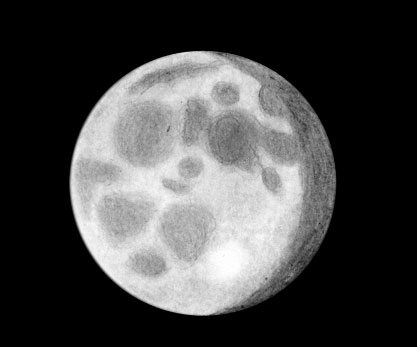 The nearly full moon at night is a bear to study naked-eye. There is so much flaring, it is hard to see details. As with my daylight observation on 6/16/05, Mare Tranquilitatis and Fecunditatis were the darkest features. Tycho’s white splot also became apparent after staring for a few seconds. Oceanus Procelarum didn’t look like a single entity. The western limb of the moon was hard to discern. I was able to make out the “Man in the Moon”, and “The Rabbit”. But the “Woman in the Moon” was a hard sell. I see the features that make her up, but it’s a stretch to me.