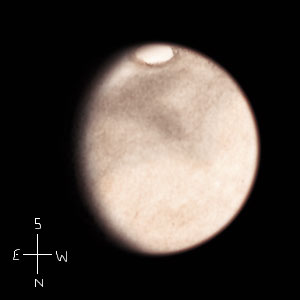 Mars was still low in the east and the seeing was poor when I made the observation. The South Polar Cap was still prominent. After shading in the darker areas showing up in the southern hemisphere, I looked up the likely features. Tharsis dominated the norther half in featureless brightness while the main dark feature I saw was apparently the Solis Lacus region. I caught glimpses of a lighter region along the south terminator that might have been Argyre.