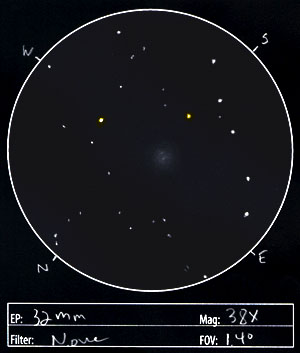 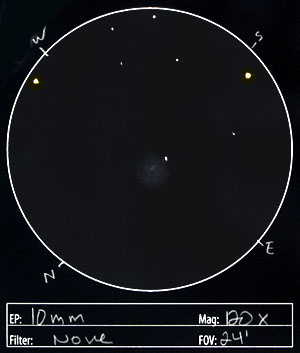 Move mouse over images for labels and movement marker.

Having had success finding this comet the previous night, I wanted to try again and see if I could also detect a difference in brightness in the day since the hit by the Deep Impact Probe. Several online reports noted a distinct increase in visibility and brightness of the pseudonucleus in the minutes and hours after impact. I wish I had observed at a higher magnification and kept my scope on the comet the previous night. Although I don’t regret the enjoyment folks got from the Sagittarius beauty-detour.

I’m glad I made the effort to come out this night though. The comet was definitely easier to find and observe. My first glance at 38X gave the unmistakable impression of a pseudo-nucleus. Further inspection even made it look like a split nucleus. I increased power to 120X and found the newly visible pseudo-nucleus to be 1 to 2 minutes north of a star that was just at the edge of the obvious portion of the coma.

Blurring the focus gave the impression that the comet’s magnitude was very close to that of the nearby star. So far I haven’t been able to identify the star with Simbad or VizieR (my skills as an amateur astronomer are not complete). So I’m not able to make a comparative magnitude estimate.

After sketching the view at 120X, I moved down to 38X for a sketch of the larger field. By the time I returned to 120X 40 minutes later, I was able to discern movement of the comet, and plotted this on the 120X sketch.

Overall, it was very satisfying to see the difference in brightness and appearance of the the pseudo-nucleus since the successful impact with the probe. I’m glad the great skies at Anderson Mesa made the observation possible in my small scope.