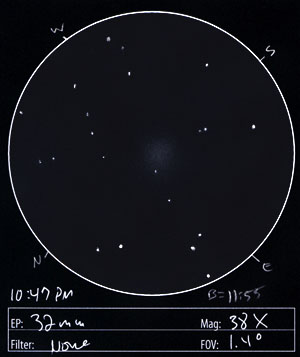 Move mouse over image for labels and movement marker.

Sunday, June 3, 2005 at 10:52 PM local time was the moment slated to observe the collision of the Deep Impact Probe with Comet 9P/Tempel 1. Not that there would be much to see with my 6″ scope, but I wanted to try. During the preceding week, I had tried to locate the comet from my front yard with no success. So I headed up to Anderson Mesa on June 3rd to see what a dark sky could do for my comet hunting. It worked.

The comet was a tough find for me. After locating the exact star field, I began to notice a subtle glow in the position plotted for 9P/Tempel 1. Several friends had joined me for a look. I hated to disappoint, but this was not a magnificent sight. Not that I minded personally. I was happy to finally see it.

Brian Skiff, from Lowell Observatory, showed up anonymously to grab a look. He verified that he saw the comet in the eyepiece about the time I guessed who he was. While he went in to the observatory to view the impact on a finder scope, we waited out the event. I sketched the field for comparison before and after the collision. I kept my eye glued to the eyepiece for several minutes before and after in case any sort of impact flash could be seen. There was none. With close to a dozen pals milling around my scope and (fortunately) Scott Sadik’s 6″ Dob, I decided to give some tours of Sagittarius while waiting to see if the comet brightened gradually.

Brian returned from the observatory about an hour after the impact and noted that the observatory was reading an increase in brightness of the nucleus over the past hour. We slewed the scope back over for a look, but the comet was starting to dip into thicker atmosphere and sky glow, so it was hard to gauge a difference. I was able to note movement against the background, so I noted that on the sketch.

* Based on published sources.