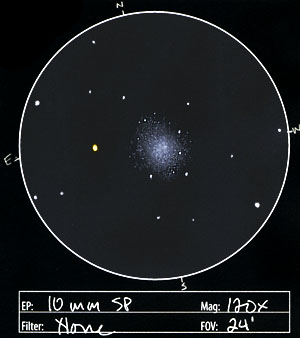 I didn’t realize how nice this globular cluster would look. It stood up well to magnification, with stars resolving across the face of the cluster. It appeared noticeably elliptical in its outer reaches, pointing southwest to northeast. The core was soft but robust. It seemed that the core’s brightness was harder along the north side, and faded more softly to the south. I would estimate its dimensions at 6′ x 4′. Also, the core seemed to reside closer to the south-southeast side of the overall body of the cluster. A bright yellow star hung about 6′ to the east of the core. Overall, the cluster gave the offhand appearance of an elliptical galaxy.

M92 is a globular cluster about 26,000 light years away in the constellation Hercules. It is a bit more distant than it’s brighter, neighboring cluster M13. An age estimate of 16 billion years is being re-evaluated based on new distance scale information for the universe from the Hipparcos satellite, and so may be a bit younger. Its 14′ extension yields a diameter of 109 light years, and may have a mass of about 330,000 solar masses. It is approaching us at 112 km/sec. The precession of Earth’s axis will cause M92 to become our “North Cluster” or “Polarissima Borealis” in about 14,000 years, as it was previously, about 12,000 years ago.