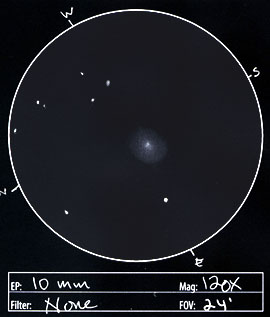 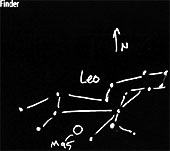 This galaxy appears to be mostly circular, with a gradually increasing brightness toward center, with a stellar core. If anything, it may be slightly elongated east to west. Its width was about the same as the distance between two close stars to the west.

M95 is a barred spiral with nearly circular arms. After checking astrophotography of the galaxy, it appears that the part I saw was actually the core region that is indeed elongated east to west, while a larger, outer rim of dimmer arms extend and elongate perpendicular to this direction. M95 is a member of the Leo I Group. It was one of the galaxies used by the Hubble Space Telescope to help determine the Hubble Constant. The HST was employed to look for Cepheid Variables in the galaxy that indicate it is about 35.5 million light years distant. M95 was discovered in 1781 by Pierre Méchain and subsequently included in Charles Messier’s catalogue.