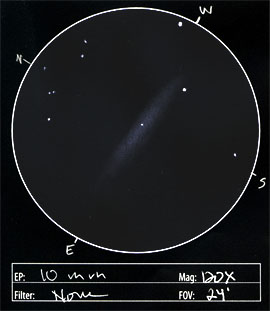 My first low power view of M108 was a pleasant surprise as it shared the neighborhood with the round planetary nebula, M97. M108 is a strongly elongated galaxy, pointing east to west. The core region displayed a sturdy, rectangular bar that dropped off in brightness rather quickly, with only a bit of softer extension at the east and west ends. It had either an incredibly tight, stellar core, or else a foreground star perfectly placed in the center. Its width seemed to extend about 12′ with a narrow dimension of 2′.

M108 is a nearly edge-on galaxy with no apparent central bulge or core. It is however rich in mottled, obscuring dust along its major axis. There is little evidence for a well-defined spiral structure. This member of a loose galaxy association called the Ursa Major cloud, lies about 45 million light years away and is receding at 772 km/sec. The rich dust knots are apparently well viewed even in small scopes. Which would indicate that I need to spend more time resolving it next time. (I was running out of steam when I made the observation, and that might have accounted for the lack of detail in the sketch). M108 was discovered by Pierre Méchain in 1781 and observed by Charles Messier shortly thereafter. It wasn’t officially published however, and was thus re-discovered by William Herschel in 1789. Owen Gingerich added the galaxy to Messier’s catalog in 1953 after consideration of Messier’s notes and correspondence with Méchain.