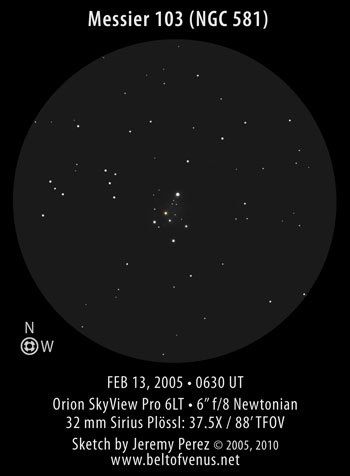 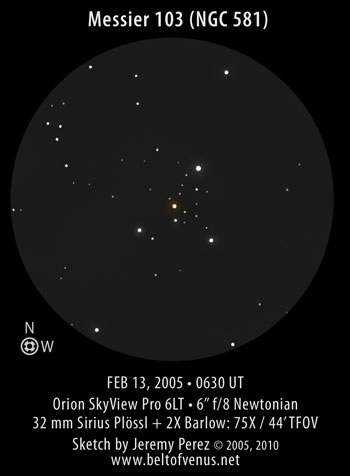 M103 was pretty simple to find. It was 1° east of Ruchbah in Cassiopeia. It’s pretty small compared to some of the recent Messier clusters I’ve viewed–about 5′ x 2′. It appeared to be strongly elongated north-northwest to south-southeast. There was an orange star at the center. The faint glow of the dimmer stars is bounded by an almost equilateral triangle of bright stars, with 2 more bright members on the northeast boundary of the triangle (the outtermost of these two is the orange one). The faint glow of stars at 37X resolves better at 120X. To the east of the cluster, about 15′ away, is a star destroyer asterism of four stars that are pretty bright:

After making the observation, I went to The Sky software to check against my notes and sketch a bit. I was bummed to find that the star I thought was orange was actually listed as a white-blue B91V star. My color-recognition confidence dropped to the floor. But a few days later, I did some searching and found that this star (SAO 11826), actually is a red giant, as shown in the following image from Kitt Peak observatory (image has been rotated to match my sketch): 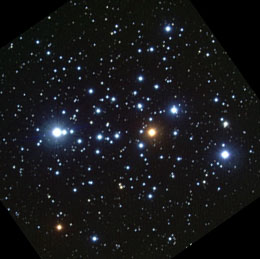 M103 is one of the more distant open clusters in the Messier catalog. It’s distance is estimated between 8000 and 9200 light years, with some uncertainty due to an unknown amount of light absorption in the intervening space. If a distance of 8500 light years is used, the diameter of the cluster would be 15 light years. The brightest star in the cluster, (which I believe is the brightest star I sketched on the northern side) is actually a binary, Struve 131. This binary is not actually a part of the cluster. Seeing was poor, so it doesn’t look like I made out the dimmer companion. While the main sequence stars of M103 point to an age of 9 million years, the Sky Catalogue 2000.0 gives a much higher age of 22 million years, and the Geneva team of G. Meynet provide an age of 25 million years. The number of member stars was previously ranged from 25 to 60, but more current figures from Archinal and Hynes (2003) give a quantity of 172 member stars. The cluster is approaching us at 37 km/sec. 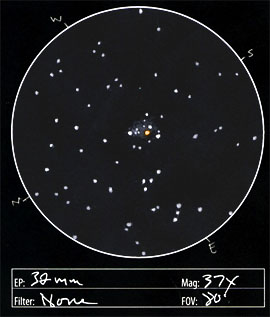 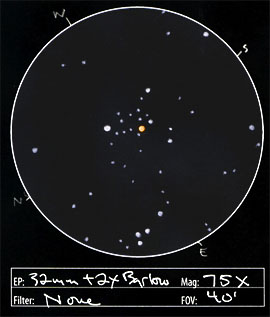