Article written for the Coconino Astronomical Society, February 2005 Newsletter
Back in elementary school, I remember dwelling on books with beautiful pictures of Halley’s Comet. Sweeping by every 76 years, seeing it was a once-in-a-lifetime event (or twice if you’re born at the right time I suppose). According to those books, it would pay its next visit in 1986. I imagined how exciting it would be to see a comet splayed out across the sky in soft, feathery glory. At the time, it didn’t occur to me that there might be other comets out there waiting to make a splash. Halley’s was it as far as I knew, and I’d better not miss it when the time came.
I was 16 when 1986 rolled around. And the news wasn’t too good for the old comet. It wasn’t predicted to put on a very bright display–particularly in the middle of an urban area like Phoenix. One night, some family and friends got an itch to drive outside the city and look for the comet with binoculars. As we stood outside our cars on the side of the road, there were no star charts, red lights, or tripods; only a bunch of people staring and pointing in confusion at the hazy horizon. I recall at one point, a few dear friends even became convinced (no doubt, in desperation) that some street lights in the distance might be the comet. When I finally got a moment to use a scarce pair of binoculars, I managed to pull up a faint, small, gray fuzzball hovering near the horizon. There it was. My big beautiful comet-of-a-lifetime. No fantastic exclamation-point of a tail. No sweeping featheriness. Just a round ball of lint.
I was torn. Partly I was disappointed that it was such a humble sight. Being the ‘space nut’ in the group, I was also a little embarrassed that this amazing, historic sight turned out to be a nearly invisible puff of smoke. But I was fulfilled in a sense that I had seen the famous comet I had read about so often.
Then ten years later, something wonderful happened. Two big beautiful comets, Hale-Bopp and Hyakutake, swept across the sky within a year of each other. My wife and I were expecting our first child at the time Hale-Bopp slid into the sunset, and those sublime spectacles made that time seem even more magical.
It wasn’t until 7 years later, August 2004, that I finally took the plunge into amateur astronomy. Since I got my 6″ Newtonian and a pair of 10 x 50 binoculars, I’ve been sampling from just about every plate the night sky has to offer. Nebulae, galaxies, star clusters, double stars, planets, and even–gasp–the moon. Back in December though, I finally turned my attention to an old interest. There was a relatively new comet apparently making it’s way north from the southern sky.
So one night in mid December, I opened a web browser and jotted down my first comet ephemeris for C/2004-Q2, Comet Machholz, and then headed out to do some very enjoyable dark sky observing at the US Naval Observatory with Bill Ferris and Max Oelschlaeger from the Coconino Astronomical Society. While twilight faded away, I took a few minutes to look up the coordinates in my Bright Star Atlas. It looked like the comet would be a bit west of Lepus, in the middle of an imaginary funnel projected by Lepus’ stars. As the chill night wore on, and Orion and Lepus began to position themselves higher in the sky, I grabbed my binoculars and decided to take a look. It didn’t take more than a few moments to see a very obvious, circular poof of light right where the comet should be. I took away the binoculars and could just make out the dim smudge of Comet Machholz naked eye.
Was I excited? You bet I was. It wasn’t an exquisite beauty like Hale-Bopp or Hyakutake, but it was my first ‘astronomically observed’ comet, and it was beautiful just for that. Within minutes, Bill had slewed his 18″ Obsession over, and we were treated to a bright, soft-edged, decidedly green treat. The pseudonucleus was a bright, thick dot. The dust and ion tails were widely separated and very different in appearance. This was a new way of seeing a comet, and very unusual to me. The dust tail appeared as more of a slight elongation of the coma, while the ion tail was thin and faint.
I was already doing some widefield photography of the Pleiades and Hyades, so after finishing those shots, I swung over and started shooting the comet. I could see immediately in the camera’s LCD screen that the comet was showing up easily, and giving off a rich aqua color. Such a strange hue. I expected blue or yellow or white. But not blue-green. That night I was hooked by Comet Machholz. 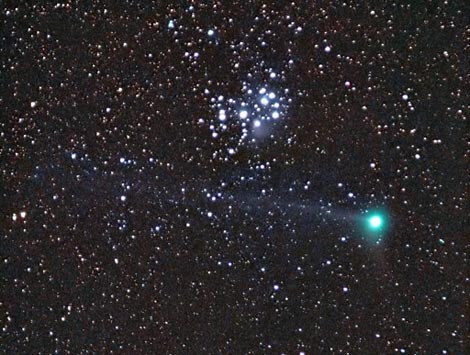 Rarely has a clear night passed since then that I haven’t at least taken time to peer at it with binoculars outside my front door. There is a strange satisfaction I get out of watching it progress across the stars, night by night, even hour by hour. As it sails north, its tails rotate in relation to one another like some strange clock where the hour hand moves as it should, but the long minute hand works backwards. It’s simply fascinating. And it’s a great subject for widefield piggyback photography. I feel I’m going to miss it as it fades away into the north. But there are more out there, I know now. They may not all have as much personality as Machholz, but I think I’ll find it hard to resist watching their progress too.
Jeremy Perez

2 Replies to “Something Turquoise Sails North”