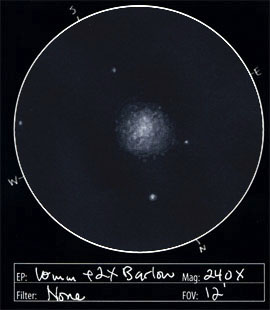 This globular cluster appeared circular and about 2.5′ in diameter. It was condensed toward the center, but not strongly. There may be a slight elongation north-northwest to south-southeast. There were a few orange and yellow stars in the field. Seeing wasn’t great, but at 240X, I could start catching hints of soft granularity and tried to represent that in the sketch. One close star sits about 3′ north of the center of the cluster. I represented the stars softly there due to the poor seeing.

M79 is an unusual globular cluster in that it is located far from the galactic center around which most globulars are grouped. It lies a little more than 40,000 light years away, and about 60,000 light years from the galactic center. Its 9.6′ diameter is 4 times wider than I estimated–perhaps due to poor seeing I didn’t make out a fuller extent of the outer halo of stars. This diameter corresponds to a diameter of about 118 light years. The cluster is slightly elliptical at a position angle of 45°, which corresponds to NW to SE, which isn’t too far off from my NNW to SSE estimate. The cluster is receding from us at about 200 km/sec.

In 2003, it was found that M79 is possibly a new immigrant to the Milky Way from the Canis Major Dwarf Galaxy which is currently interacting with our galaxy. M79 was discovered in 1780 by Pierre Méchain, who reported it to Charles Messier, who then cataloged it. It was first resolved into stars and recognized as a globular cluster by William Herschel in 1784.