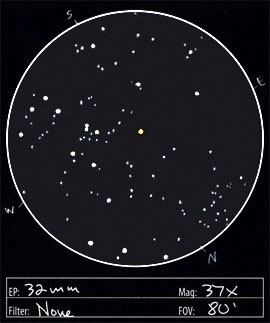 M47 is a wide open cluster with a bright orange star on its northeast side. To the north is a smaller, less prominent cluster (NGC 2423) that has a triangular asterism within it. The shape of M47 is irregular. The brightest stars are scattered randomly. There is one very tight, bright double star in the center of the cluster. The width of M47 appears to be 60′ while NGC 2423 is more like 20′.

M47 lies about 1600 ligt years away, contains around 50 stars, and spans 12 light years. Overall, the population of stars is similar to that of the Pleiades. It contains two orange K-type giants with masses about 200 times that of the sun. It is estimated to be 98 million years old and is receding from us at 9 km/sec. Charles Messier cataloged it in 1771, but due to an error in marking its position, it was not recognized as a Messier object and so re-discovered by William Herschel in 1785. In 1984, a book by Hodierna came to light in which he described the cluster as “a Nebulosa between the two dogs” in 1654, making him the original discoverer on record.