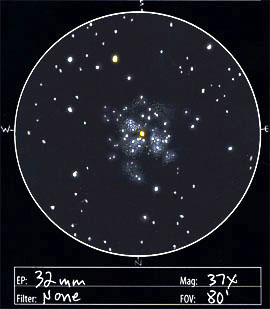 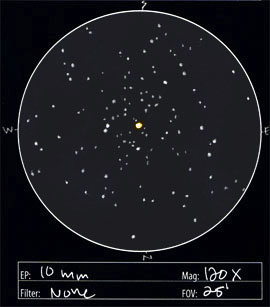 Hoo-boy! This is a dense cluster. It had a roughly triangular shape, trisected by dark lanes focusing on a bright yellow-orange central star. It was very stunning to look at. I was really struggling with how to sketch it. Plotting star positions wasn’t giving the feel for granularity in the triangular area. In the end, I dashed in boundaries of the grainy regions, and then lightly shaded and stippled these. It looks like a little too blunt of an instrument, but it’s better than no indication at all. The south end of the view was punctuated by a bright yellow star. Going to a 120X view still showed some localized background granularity, but I didn’t indicate this in the close-up sketch.

M37 is the brightest and richest of the three Auriga Messier clusters. It contains 150 stars brighter than mag 12.5, with a possible total of 500 stars altogether. Its age is estimated at 300 million years, and contains at least a dozen red giants. Distance estimates range from 3600 to 4700 light years, with a diameter of 20 to 25 light years. M37 was discovered by Giovanni Batista Hodierna before 1654, and independently re-recorded by Charles Messier in 1764.