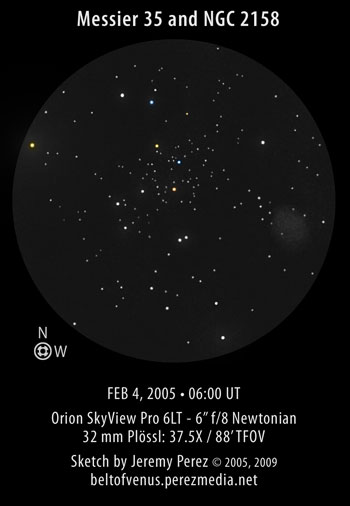 This cluster is nice and resolvable at low power. As with M37 and M38, it has a bright central star–orange in color. Some yellow and blue stars to the north and east spiced up the color a bit. To the west-southwest, a soft, unresolved glow indicated a more distant cluster (NGC 2158) which made a nice counterpoint to the wide open stars on the left half of the view. M35’s shape is roughly circular and not condensed, with its brighter stars scattered evenly. Its diameter appears to be 28′ across (which matches exactly the dimension listed by SEDS–Wahoo!). NGC 2158 is roughly 8′ in diameter, with a soft glow that doesn’t appear to have a central condensation–just a soft fade at the edges.

[Edit Jan 6, 2010: Cleaned up and re-framed the digital version of sketch. The original version of the sketch can be found here: 2005 version of M35 sketch.]

M35 consists of 400-500 stars with 120 brighter than magnitude 13. It is 2700 to 2800 light years distant with a diameter of about 24 light years. It is estimated to be about 100 million years old and contains several yellow and orange giants. The cluster is approaching us at 5 km/sec. It was discovered by Philippe Loys de Chéseaux in 1745-46, independently rediscovered by John Bevis before 1750, and catalogued by Charles Messier in 1764 (Messier acknowledges Bevis’ discovery).

NGC 2158 is situated 15′ southwest of M35, glows at magnitude 8.6 and has a diameter of 5′ (compared to my estimate of 8′). It is much more compact than M35, ten times older and 5 times more distant. With an age of over 1 billion years it contains many yellow stars. It was once thought to be a candidate for a globular cluster. It was discovered by William Herschel.