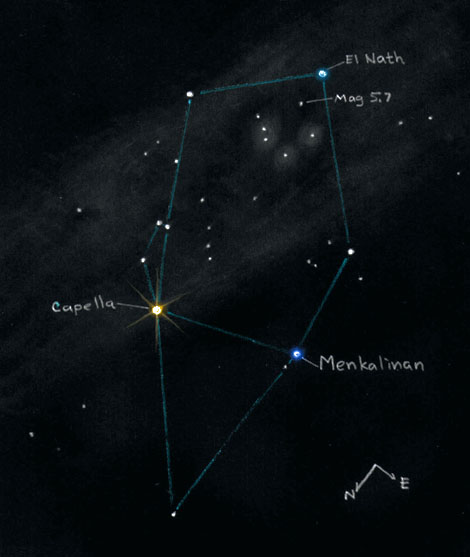 Once some high cirrus clouds cleared out, Auriga materialized in detail as a pentagon shape. The northwest star, Capella, was the brightest, colored yellow-orange. El Nath, in the south, appeared cyan, while Menkalinan looked blue. The Milky Way’s soft light flowed west-northwest to east-southeast along the southwestern half of the constellation. Just north of El Nath, three areas looked like unresolvable star clouds as indicated in the sketch.

The dimmest star I sketched was Mag. 5.69–SAO58040–north of El Nath. Auriga is home to 3 big Messier open clusters, M36, M37 and M38, as well as a number of other smaller open clusters. Near M38 are two big asterisms I enjoy seeing in binoculars: The Smiley Face, popularized–as far as I know–by Carol L. at CloudyNights.com, and a Grrr Face I noticed just above it. Those asterisms account for two of the star clouds I noticed and scrubbed into the sketch.