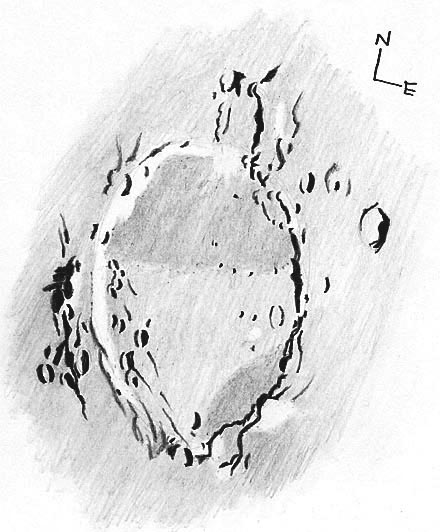 It’s hard to get used to the fact that the moon plays misery on DSO observations two weeks out of every month. I can see that my biggest interest leans toward those dim patchy things, but given a little time exploring the moon, it still turns out to be very rewarding. So I took some time this bright moonlit evening to explore some likely craters listed in the Astronomical League’s Lunar 100.

Schickard is a large crater on the western limb of the almost full moon. There is an intersecting crater on the north end that looks about 20% as big.The southwest floor has a series of ridges or cracks that run northwest to southeast. There is also a half-circle of craters on the western floor. On the east side floor, a distinct white patch is visible.

After getting past the dazzling array of contrasting crater-wall shadows, I noticed to my surprise that the floor of the crater gave the appearance of a monotone scoop of Neopolitan ice cream. The north half and southeast tenth of the crater floor were darker than the rest of the floor. These three distinct shaded areas didn’t owe their differences to some lucky angle of light, as their boundaries ran roughly parallel to the angle of the sun. Also very noticeable was a rough jumble of terrain outside the crater along the west-southwest rim. It was tough to sketch that and make it look like it belonged to the local terrain without spending an eternity linking it to continuing terrain further west. So it is what it is.

According to the The Moon Observer’s Guide, Schickard is one of the Moon’s largest craters at 227 km in diameter. Its walls rise 2500 meters above the floor. Its southwestern floor has been noticeably disrupted by debris thrown from the Orientale impact over 1000 km to the west. This debris carved valleys and chains of craters along this part of the crater. Periods of lava flooding have given the crater floor a multi-toned appearance with darker sections in the northern and southeastern sections–the most striking example of this on the Moon’s face.

The crater intersecting the north side of Schickard is Lehmann Crater. Lehmann is 47 km wide (20.8% the width of Shickard–hahah!) with 800 m walls.