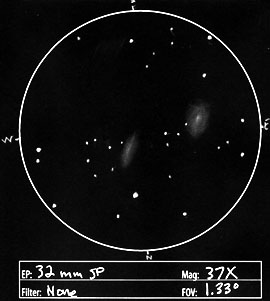 This is my first go at the galaxy clusters in Leo and Virgo. M65 and M66 were pretty easy to find in the rear leg of Leo. Both fit easily within the 1.3° FOV of the 32 mm eyepiece. M65 was the dimmer of the two. Its axis ran NNW to SSE. I couldn’t make out a nucleus, but it was brighter toward the middle. M66 was the brighter galaxy, and more widely oval in shape, with an almost stellar nucleus. It too pointed NNW to SSE, but perhaps a bit more turned clockwise compared to M65. At times, it seemed there might be a swoosh of an arm around the south edge of the galaxy. Transparency and local lighting were too poor for higher magnifications to reveal more. I do believe a darker sky would hint at more structure in both. I’d estimate the distance from center-to-center of each galaxy to be about 23′. The dimmest star I ended up sketching was mag. 12.35.

M65 is a normal Sa type spiral galaxy with tightly wound arms, a prominent central lens, and dust lane. There are some knots visible near the dust lane which may be areas of star formation. Although it appears to be gravitationally bound to it’s neighbors in the Leo Triplet (M66 and NGC 3628), it doesn’t appear to have been structurally disturbed by any interactions.

M66 is a spiral galaxy whose shape has been distorted by interactions with its Leo Triplet companions, giving the appearance that the arms are raising above the plane of the galaxy. There are many emission and reflective nebulae evident, showing many active star forming regions. The dust in the core of M66 is thought to be heated by older stars, as opposed to younger stars as is usually the case.

M65 and M66 are about 35 million light years away, and were catalogued in 1870 by Charles Messier.