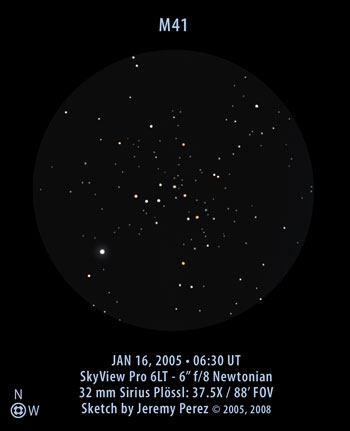 The above sketch is an update to the original to clean it up, reduce fainter star weights, and update formatting. The original is shown below. 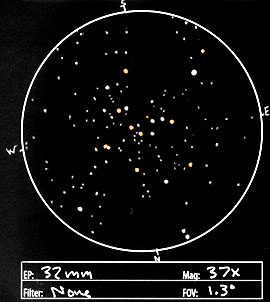 This open cluster is speckled with a variety of star brightness and color. A number of orange stars stand out. There are several apparent double stars throughout. I plotted 83 stars in the main body of the cluster, and the faintest my sketch seems to go is about 11.4. The bulk of the cluster fills about 40′ (wahoo! that matches closely to the 38′ diameter listed with SEDS). There is a tight, tiny, linear 3-star asterism just southwest of the center of the cluster. The brightest star (maybe foreground?) is about 30′ southeast of the center. As for the rest, the brightest stars tended to be orange. While the orange color stood out, I had trouble telling blue from white, so I didn’t mark those. Also, I can’t seem to tell yellow from orange yet :-/ At this stage in learning to visually distinguish star color, I may have made a couple mistakes marking white stars orange, but I’m leaving the colors alone in the sketch, to convey what I thought I saw.

M41 is an open cluster containing about 100 stars, including several red giants with a chemical composition similar to our sun. The stars are distributed over a volume about 25 to 26 light years across, and the cluster is receding from us at 34 km/sec. at a distance of 2300 light years. The relatively bright star in the southeast corner of the cluster is a blue giant that is about half the distance to the cluster, and thus is not a member (hah!).

M41 was possibly recorded by Aristotle in 325 BCE. Hodierna was the first to catalog it before 1654, then it was rediscovered by John Flamsteed in 1702. It was found again by LeGentil in 1749, and finally by Charles Messier in 1765. Phew.