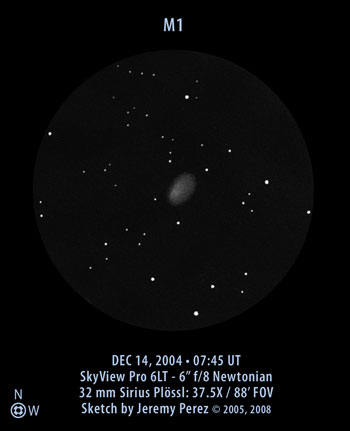 The above sketch is an update to the original 37X version to clean it up and update formatting. The original is shown below. 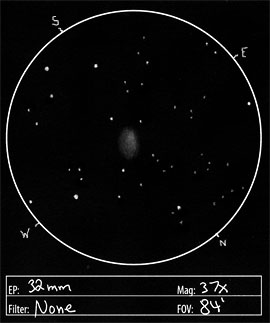 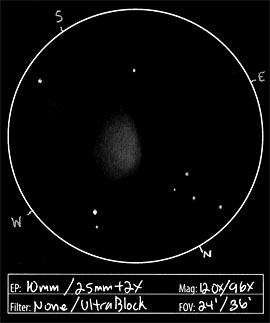 At 37X, M1 is a smudge with soft, but not diffuse edges. It seems to be elongated northwest to southeast. The northeast side seems to be sharper. There was a slight hint of a parallelogram shape.

The 120X view still shows the northeast side to be sharper. It seems to cut in at a 45 degree angle on the north side. The south corner is softer and rounder.

Due to fogging on the eyepieces, I swapped to a 25 mm EP plus 2X Barlow for a similar magnification. It looked pretty good. There was some hint of raggedness on the edges, but these hints are fleeting and inconsistent. I added the Ultrablock filter. It suggested more of a northwest to southeast bar of brightness, but not much more detail. I think I need a darker sky and better dark adaptation to make out edge detail more certainly, and I do think it would be possible with my scope.

The Crab Nebula is the most famous and conspicuous known supernova remnant. It was noticed on July 4, 1054 by Chinese astronomers, and was about 4 times brighter than Venus. It was visible during the day for 23 days, and at night for 653 days.

The nebula consists of material ejected in the supernova explosion, and has spread to an area about 10 light years in diameter, and is expanding at a rate of 1800 km/sec. The light it emits comes in a reddish component and a bluish component. The red component has an emission line spectrum like that of planetary nebulae (including hydrogene). The blue background spectrum is continuous and consists of highly polarized synchrotron radiation which is emitted by high-energy electrons in a strong magnetic field.

In 1968, a radio pulsar was discovered in M1. It is a neutron star that rotates 30 times per second. Its magnetic interaction with the nebula is responsible for much of the luminosity of the cloud.

The Crab Nebula’s remnant was discovered by John Bevis in 1731. Charles Messier independently discovered it in 1758 when he was looking for the predicted return of Halley’s comet. At first he thought it was the comet, but when it failed to exhibit motion, he cataloged it. It was this object that started Messier on the path to the cataloging project he is now famous for.