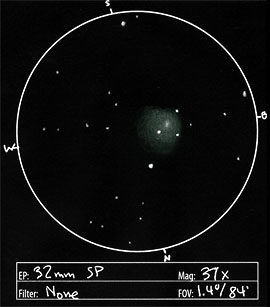 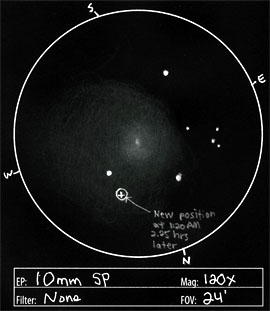 Since viewing Machholz the night before at the USNO, it had moved noticeably north. Light pollution here at home was pretty bad, but I think I can still see it barely by naked eye. Through the eyepiece, it is just inside the southwest edge of a triangle asterism. Its nucleus is like a teeny kernel that doesn’t survive direct vision, but is very obvious with slightly averted vision. The coma is sharper along the east and southeast sides, lending the impression of a wide, short tail breezing off to the northwest. I couldn’t make out the thin ion tail like the previous night in Bill’s 18″ dob. It just needs some more time to brighten I’m sure. It was easy to find just west of Lepus. It also exhibited a decidedly greenish color in comparison to stars in the field of view.

I checked back at 1:20 AM (2 hours, 15 minutes later) and Machholz had moved north-northwest noticeably. A rough estimate based on the 10 mm field of view of 24′ is that it moved about 5′ in that time, or 1′ every 27 minutes–or 2.2″ per minute. That seemed so fast for on of those dim fuzzy objects against the background stars.

Later checking in The Sky pinpointed the locations of the comet and surrounding stars, and they matched the sketches exactly!

During a visit in November of 2005, Don Machholz made a presentation to the Coconino Astronomical Society. After the meeting, he agreed to autograph my observing log from this night. I finally got around to scanning it. Click the image below for a larger version. 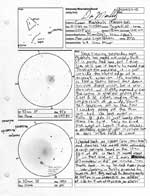 Comet Machholz was discovered the morning of August 27, 2004 by Don Machholz with a 6″ f/8 Criterion Dynascope reflector…the same type and size as my scope. It will reach its brightest on January 9th, 2005, when it will be about 4 degrees from the Pleiades.