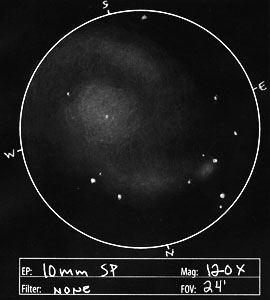 Tonight, I thought I would try resolving M33 a bit more. After a brief look in the 32 mm eyepiece, where I noted mottling, I switched to the 10 mm EP. At first, I felt lost. But as I panned around, gradually the core became obvious, and about the same time, I noticed a pretty significant clump of fuzz. I was excited that I might be seeing an emission region in M33. So I asked for an assessment from Bill Ferris. He came to the eyepiece and confirmed that I was indeed seeing an HII region that he suspected to be NGC 604. We checked the charts, and confirmed it. With patience and averted vision, the arms of M33 softly came into view. NGC 604 rested at the end of the arm that sweeps around the north side of the galaxy. The HII region was soft and oval. It seemed elongated from WNW to ESE. Its level of brightness competes with brightness of the core of M33. The swoop of a wider arm mass on the south side completed the excellent view. I tried to find other HII regions, but was unsuccessful on this trip.

M33 is a prominent member of our local group of galaxies. It is a 50-60,000 light-year-wide spiral galaxy that is about 3 million light years away. While many sources list the Andromeda Galaxy as the most distant naked-eye object (2.9 million light years), the Triangulum Galaxy is currently calculated to be slightly further out, and can be visible to the naked eye under very clear, dark skies. It is approaching our solar system at 182 km/sec, but our rotation around the Milky Way Galaxy exaggerates that number–it is actually approaching our galaxy at 24 km/sec. For observers with larger telescopes, M33 can be a target rich in emission and reflective nebulae as well as globular clusters. In fact it contains one of the largest HII emission nebulae currently known–NGC 604 has a diameter of nearly 1,500 light years.

Knowing this galaxy can be difficult for people to recognize at first, it felt good to be able to pull it up and observe it in the scope. The difficulty comes from how huge it is. It’s a bright object at mag. 5.4, but because that light is spread across an area over twice the width of the full moon, it is hard to see where the brightening of the background sky begins. After being shown its location in relation to the Triangulum constellation, it’s easy to center on now. It shows up as a very diffuse nebulosity that fills the 37X/1.4° view. There was a slight hint of a core elongated N to S. I thought I could see a gap in brightness that might suggest an arm to the E of the core.