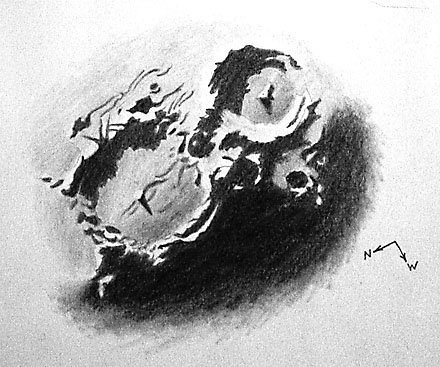 The weather and my schedule pretended to offer some cooperation for a lunar sketch tonight. It was pretty mild and only a few patches of clouds were blowing around to the SW. So I set up, drew a bead on the moon and saw that Ptolemaeus, Alphonsus and Arzachel were displaying their distinct profiles on the terminator. These were the first craters that really attracted my attention when I first started viewing the moon 3 months ago. So I was happy that I’d be able to take some time with them.

The problem I find I’m facing when sketching features on the moon, is restricting myself to something manageable. There’s always something else in the vicinity that begs for attention…something to make it a set. And with Ptolemaeus, Alphonsus and Arzachel, it’s hard to break up the set. But I decided to focus on Alphonsus. As you can see, I couldn’t resist the tempation to drag Arzachel in too. The floors of these craters are nice and smooth and nicely display the moon’s curvature with shadow gradually darkening on western sides, with Alphy and Arzy sporting peaks that rise brightly into the sunlight. Arzachel’s peak is the broader of the two. A couple superimposed craters have given the appearance of a linkage between both craters, and just east of this is where the SE edge of Alphonsus appears to be broken open with the very distinct suggestion of riverbeds pouring out into the plains beyond. Of course they are something else–fault lines or coincidental ridges.

The base of Alphonsus was split by a sinuous series of ridges that ran from SSE to NNW, crossing the central peak along the way. These ridges had an almost braid-like appearance on the SE side as though playing Rapunsel to Arzachel. On the east side of the crater, shadows emphasized a ‘V’ formation in the crater wall that pointed to the central peak. If I were trying to graphically draw attention to that peak, I couldn’t have come up with a better set of features. The sunrise shadows on the east side of the craters were very deep and sawtoothed, but didn’t show any significant daggers. That part was left up to both central peaks. I tried to discern the dark spots in the bottom of Alphonsus, but the lighting was too stark to see–not to mention the turbulence was getting progressively worse and the wind was starting to play jackhammer with my scope.

Before I could tidy up my ill-advised sketch of Arzachel, the clouds put the finishing touch on things by inking out my view, and I had to call it quits. So you’ll notice that the NW end Arzachel’s crater and the portion connecting to Alphonsus are pretty devoid of detail. Oh well. Saturn was up and in the clear for a while, and I finished up by taking a peek at it, but seeing had gone into the toilet so it was pretty wiggly. Still, Giselle and some guests we had over were able to take a quick look.

I decided not to use the Ebony pencil in this sketch, and I found it was much easier to get progressive blending in the darker shadows. I’m really going to have to work on focusing myself on one crater at a time–at least for those times when I don’t want to be up all night, or when Mutha Nature tempts to throw tribbles at me.

Arzachel is the younger of the two craters and has taller crater walls, as suggested by the longer shadows. Alphonsus has some special features that make it interesting to study, particularly when the sun is higher. At one time or another, nearly all lunar craters have been considered to be volcanic. But virtually all craters are now known to be the result of meteoric impacts. The basin of Alphonsus displays some likely exceptions to this rule. Under bright sunlight, dark patches can be observed along the eastern and western edges of the crater interior. Further magnification and resolution show small craters at the centers of these patches. A couple possibilities are that meteor impacts threw up darker underlying material, or the dark patches are the result of volcanic activity. The craters are also not circular, and while this can be explained under certain meteor impact conditions, they also happen to occur along rilles where volcanic activity is more likely to occur. Spectral analysis also indicates the material is pyroclastic. So that’s a lot of coincidences to occur within the 108 km diameter of Alphonsus. Apparently, there is still debate over it, but it looks like a pretty good case for volcanos to me.