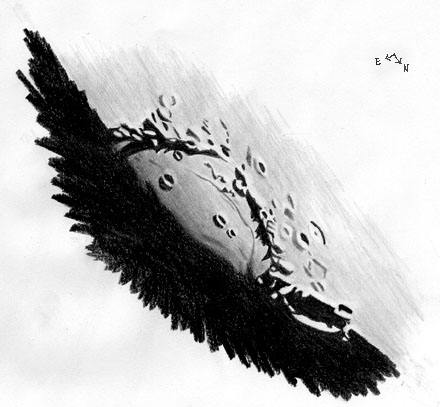 This area was the most prominent set of features on the terminator when I checked it out tonight. The flooded basin displayed an arcuate rille sliding along the inside of the rim. The rim threw stark daggers of shadow, while the basin showed a soft transition from shadow to light, nicely demonstrating the moon’s curvature. The most prominent crater in the south end of the basin, Picard, is 23 km wide.

Mare Crisium is a basin, created during the Nectarian epoch, while the mare material is of the Upper Imbrian epoch. Mare Crisium is an elongated crater that is 100 km wider in the E-W direction, although it doesn’t appear that way because it is close to the edge of the moon from our vantage point. Cleomedes Crater is a flat basined crater with a central peak that is 126 km in diameter and 2.7 km deep.