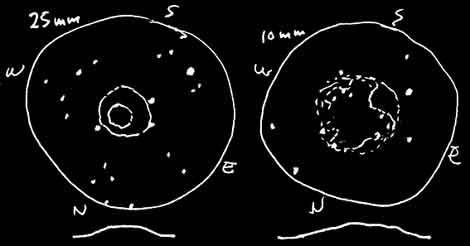 The 48X view showed a large star cluster. It didn’t have a tight core it was actually very loose. granularity apparent across its wide face. the brightest areas seemed to be nw, but not strongly so. overall is=”” dim. 120x view shows and brighter stars face, still seem in lobe on east side. didn’t appear elongated me. almost has look of dense open cluster.

M55 is a globular cluster with a large apparent size–about 2/3 the apparent diameter of the moon. It is about 17,300 light years away and 100 light years in diameter. Its highly southern declination means it can be hard for Northern Hemisphere observers to see. It was originally discovered by Lacaille in 1751-52 when he was observing in South Africa. Charles Messier tried in vain to spot it as early as 1764, but wasn’t able to find and catalog it until 1778.