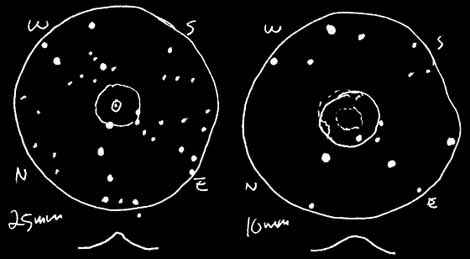 This globular cluster was bright and concentrated. The nucleus was not stellar in appearance, but still concentrated. Granularity was barely perceptible at 48X. At 120X, the granularity was still on the subtle side. Only 3 or 4 stars appeared to be flickering in and out. The brightest star involved in the cluster was on the ENE edge. Two outlying stars reside further out on the east side–not sure if they have any relation to the cluster.

M2 is a rich, dense globular cluster than lies 37,500 light years distant. It is 175 light years in diameter, and contains about 150,000 stars. Haltan Arp (1962) has estimated the age of M2 to be the same as M3 and M5, which is 13 billion years. It was discovered by Maraldi in 1746, and then independently rediscovered and catalogued by Charles Messier in 1760.