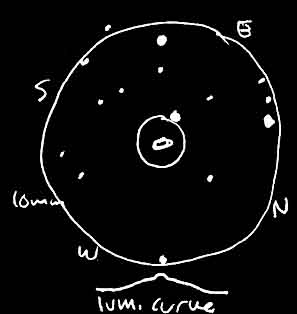 This was one of 2 galaxies I observed the night of an observing trip out to Wupatki National Monument, north of Flagstaff. The main halo of the galaxy appeared circular, but the core seemed to elongate SW to NE. The center of the core is a thick semi-stellar dot–a dim, thick stellar dot. I couldn’t see shape in the halo at this point to say if I could detect any structure. The west side seemed to be the brightest.

M77 is a large spiral galaxy that is estimated to be 60 million light years away, and is receding from us at 1100 km/sec. Its bright portion is about 120,000 light years across, while it’s fainter extensions extend that diameter to 170,000 light years. The inner disc is inclined 51 degrees to our line of sight and is estimated to have a mass of 27 billion solar masses, with the whole galaxy containing 1 trillion solar masses. The galaxy’s spectrum indicates that giant gas clouds are rapidly moving out of its core at several hundred km/sec. This expanding nebula marks M77 as a Seyfert galaxy. The energy required to accelerate the gaseous material to that speed indicates an active nucleus powered by a massive black hole that is in the process of chowing down on an influx of stellar matter. The mass of the ‘central object’ is believed to be about 10 million solar masses.

M77 was discovered by Pierre Méchain in October 1780 and described as a nebula. Charles Messier entered it in his catalog in December 1780 and misclassified it as a cluster with nebula–possibly because of foreground stars or because of knots of faint stars in the galaxy. It’s one of the first recognized spiral galaxies, and listed by Lord Rosse as one of 14 ‘spiral nebulae’ discovered in 1850.