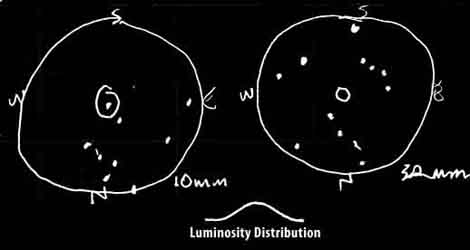 This is one of 3 globular clusters I observed at the base of the Sagittaruis teapot on 10/3/04. (The others were M69 and M54. M70 appeared as a small globular cluster with a soft distribution of luminosity, with a distinct but soft core. The 120X view seemed to show one resolved star dead center. The E edge seemed to have a sharper drop-off in brightness than the rest. The low power 37X view showed a line of 4 stars to the SSE.

Slightly larger and slightly brighter than its neighbor M69, M70 is about the same distance–29,300 light years–and is 68 light years in diameter. The core of M70 is extremely dense and is noted to have undergone a core collapse at some point in its history. It is moving away from us at the rapid clip of 200 km/sec. Charles Messier described it in 1780 as a “nebula without star.” William Herschel was the first to resolve the cluster into stars and described it as “a miniature of M3”. Comet Hale-Bopp was discovered near M70 in 1995 as Alan Hale and Thomas Bopp were observing the cluster.