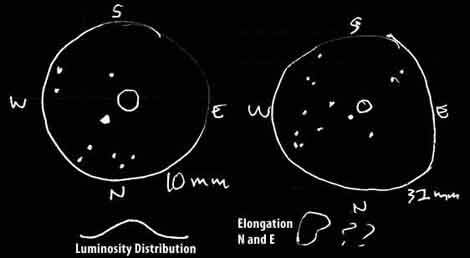 This small globular cluster showed as a fuzzy circular patch at 37X. The 120X magnification showed a hint of 2 or 3 stars across the surface of the cluster. The brightness curve was soft with an obvious central concentration. The brightest neighboring star is to the NW. With a little bit of time spent observing, it seemed like there might be a bit of extension in the cluster to the N and to the E.

M69 is 27,000 light years distant, and about 55 light years in diameter. As globular clusters go, this one is relatively metal-rich. If I were to make an educated guess, I’d say this means it is one of the younger globular clusters–which are all still among the oldest structures in the universe. The source of heavier elements in stars has to come from previous generations of stars. So the more heavy elements, the more recent the star’s formation. Our sun, by comparison, has a significantly higher concentration of heavy elements than even M69, indicating it’s young age of around 5 billion years.