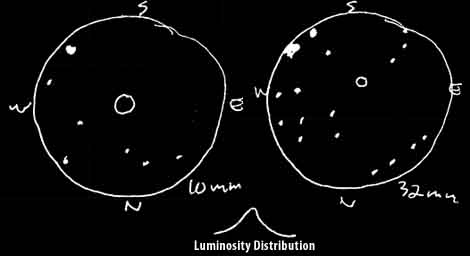 This is the most eastern of 3 globular clusters I observed at the base of the Sagittaruis teapot on 10/3/04. The others were M69 and M70, and M54 was brighter than both of those, with a sharper, more condensed nucleus. I couldn’t resolve any stars, even with the 10 mm eyepiece (120X). After some time spent observing, it seemed like I could see a single starlike point to the N of center. But not sure. It might have been a foreground star, or your basic eyestrain illusion.

While M54 is a visual neighbor to globular clusters M69 and M70, recent findings indicate that is probably not a member of our galaxy at all, but a member of the newly discovered Sagittarius Dwarf Elliptical Galaxy. This would put M54’s distance at 87,000 light years–nearly 3 times farther out than M69 and M70–making it one of the most luminous globular clusters known with a luminosity of 850,000 suns. At that distance, its diameter would be an immense 300 light years. It is moving away from us at 142 km/sec. Because of its great distance, even large amature scopes cannot resolve it into individual stars, although it can give a mottled appearance from knots of stars within the cluster. These can appear stellar, so that might explain the one starlike point I noticed.