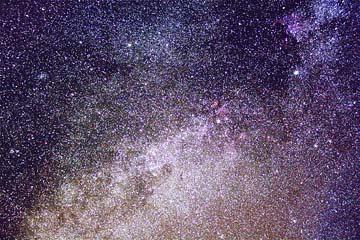 Large Size (757K)
Medium Size (202K)
By now, Orion was well above the horizon, so I twisted around and framed it. My focus was already set from Cygnus, so I just started shooting more 6-minute exposures. About a minute into the second exposure, a rustling noise caught my attention. “Pepe!” I thought, as I slowly backed away and fumbled for my red flashlight. As I swept the light through the grass and bushes, I saw the dreaded fluffy, black and white tail scuffling around. If you think that skunks will scurry away at the sound of frightened humanity, you are wrong. They’ve got the guns and they know it. So after hollering and stamping my feet and waving the flashlight menacingly, I hopped in the car and watched as it approached my setup and sniffed around. By this time, I thought to heck with night vision and removed the red filter. Now it’s beady little close-set eyes got a nice green glare to them as it stood up and sniffed in my direction. It must’ve finally got hit by the emanations of the manure field, because it turned back around and started hobbling back into the brush. I had lost track of my 6 minute count a couple times there, so I estimated where I was in the stream of time and crept back out to shut down the exposure. One more exposure, and I was done. Here’s the results of those shots: 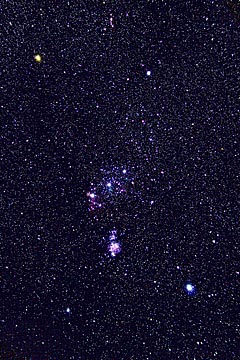 Large Size (555K)
Medium Size (129K)
As if to reassure me that stink-varmits aren’t the only things roaming around, distant echoes of elk trumpeted like land-whales, while the coyotes howled and yapped at intervals. But I couldn’t stop craning to hear the rustling of Le Pew…and then my imagination being the way that it is, I started wondering about cougars and bears. I’d hate to get tackled by a cougar or charged by a bear. I made mental plans of how to pirouette around the telescope as a shield and then dive for the car if I had enough warning of an advancing carnivore or confused omnivore. As I tamped down my predator/prey fears, I moved on to the Pleiades and had some marginal success. In an effort to bump up contrast on the main stars and bring out the nebulosity, I got a lot of oversaturated color halos around the brightest stars. This is one I’ll need to work on some more another time. 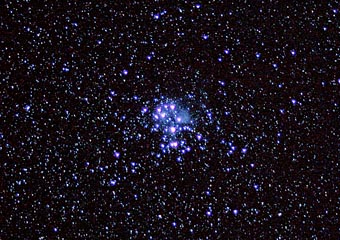 Large Size (340K)
Medium Size (136K)
I decided that was enough of the piggybacks, and moved on to some eyepiece projection shots. I had to start the focusing game over again, but this time with the telescope rack & pinion focuser. I started with multiple 20 second exposures of the NGC 884 portion of the Double Cluster in Perseus. In order to capture them both in one frame, I’d need to figure out a way to get prime focus to work. Bill suggested that a low-profile focuser might get me there. At some point, I’ll get around to removing the focuser and manually pointing the camera to see if there’s any chance of prime focus working with a different focuser. As it is, my Double Cluster image shows quite a bit of coma around the edges of the frame. Bummer. I’d have to do a mosaic to get a nice image of this one. Also noted for improvement are focus and tracking. 20 seconds was was about as good as I could do without star trails forming. I know I can get more out of the SVP mount, but that’s going to require more attention to camera balance, learning drift alignment, and relubing and tightening up the mount. Here’s the image: 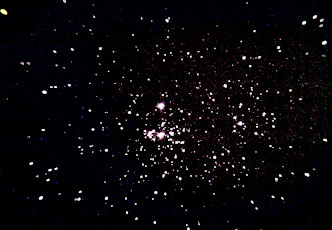 Next I moved on to M42 which was higher in the sky. Following is the result of the 12 best stacked 20 second exposures, with 3 60-second exposures that had some miraculous tracking success. For this image, I masked the 60-second frames to bring out the fainter dark foreground nebula while not blowing out the trapezium area. I’m not sure if this is considered cheating. I didn’t paint anything. I just tried to do what might be considered dodge & burn style techniques that a darkroom technician might do to bring out faint details. I think that several more stacked exposures would help with removing grain from the nebulosity. Also the focus issue. Here it is: 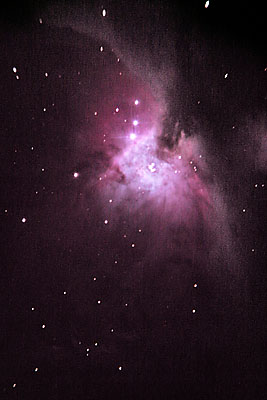 Large Size (128K)
Medium Size (55K)
As things progressed, I was anxiously keeping an eye on Saturn and Venus rising in the sky. And so now it was Saturn’s turn to get some attention. One of the things I forgot to mention is that I was using the hat trick to minimize vibration blurring from mirror slap on the previous 2 shots. With Saturn, it was an even bigger concern. I only needed about a second worth of exposure per image. And hat-tricking a second-long exposure is weird. I used my black notebook to pull away and cover back up in as quick of movements as I could. The result was a couple dozen images that varied greatly in brightness. So I used curves to get them all to about the same brightness before stacking them. I picked the 15 best images to stack, and this is the result: 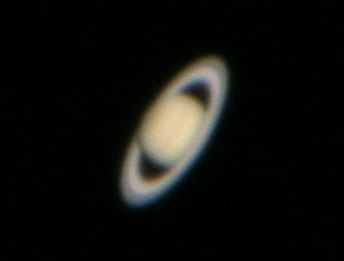 Same thing for Venus. But I’m not seeing much improvement since the last time I shot it. Fooey. I think I’m going to break down and load the hacked firmware on the Rebel so I can get mirror lockup.

Okay, so the moon looked really cool as it rose above the trees. So I took the camera off for a bit to get some good eyepiece views. Observing that hauntingly thin crescent through the eyepiece, I kept imagining that I should see the Nostromo come cruising out of the brightening dawn across the view. Definitely a sci-fi view.
I backed away for a minute and imagined a line from Saturn to Venus and then to the horizon, where I saw a bright star rising that I wagered was Mercury. So I lined up the scope and saw that yep it was definitely a blurry disk. The red-blue refraction of the low horizon made it impossible to see a half disk that I knew it should be. But I put the camera back on and snapped some pictures. I realigned the red and blue channels to match the green channel on each image before stacking, but it still came out as a blurry disk. No phase. Bummer. I think next time, I’ll let the telescope track it higher in the sky before shooting. (Finding it visually at that height would be too difficult I think, so finding it low and tracking high would be the way to go.) Here’s good old Blurcury: 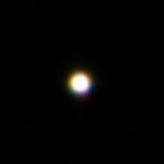 I couldn’t let the moon off easily, so I grabbed my last shots: 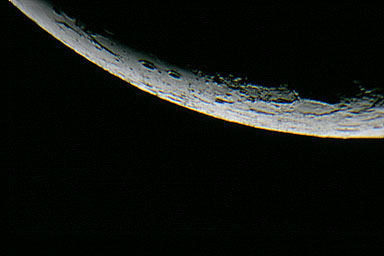 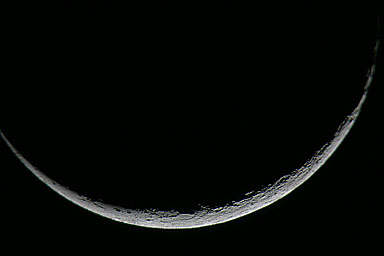 By the way, Pepe came back for a visit during the Saturn shots, but I was a lot more furious about scuffing my feet on the gravel, and he seemed to take that as an invitation to get lost this time. Doggone skunks. Maybe if I was more like Grizzly Adams, we’d just take a shine to each other, and play scratch-my-chin, and everybody’s happy. But I think I need to be a bit more seasoned for that. Also rabies. Who wants rabies?
Anyway, that was my all-nighter. The elk and the coyotes shushed up as the sun rose. I got everything packed up and started meandering down the hill just as the hunters in their ATV’s and full camo started chugging up the road. Maybe I should invest in an orange reflecto vest for the next excursion.
If you got all the way through this, you deserve a much-needed nap. Thanks for reading. 😀