After a few days of aggravating monsoonal cloud bathings, things cleared up and I finally got a great viewing session in this past weekend.
I got started Saturday night at about 8 pm and got my first look at the moon with the telescope. The brilliant hugeness of it was like a slap in the face. There was such unbelievable detail in craters. It was so bright it almost hurt. It was still a crescent just shy of its first quarter. My two kids (age 7 and 4), were both thrilled to see it. The craters on the terminator are so dark that my daughter (the 7 year old) was under the impression that they went all the way through the moon to the other side. “You would fall all the way into space if you fell in one of those!” I got some basic handheld pictures through the eyepiece. They seemed to turn out pretty good for not using a camera mount. Here’s one I stitched together from 3 pictures. (I couldn’t fit the whole thing in one shot.) 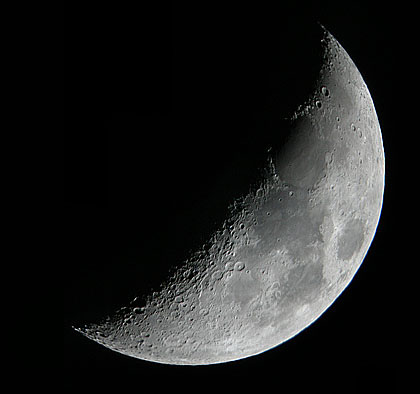 This is one taken through the 10 mm eyepiece. 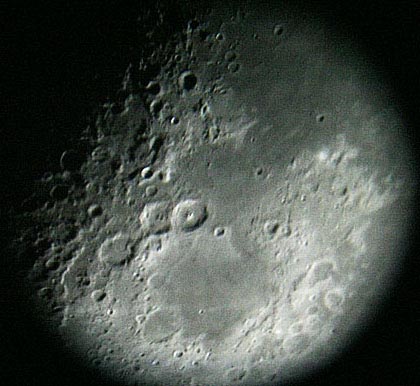 I swear, it looked better than that. But shaky handheld snapshots of a planet quivering on the horizon aren’t going to cut it I guess 🙂
So my tally for the night: M11 (reprise), NGC 6712 (probably), M31 (reprise), M45 (reprise), NGC 884, NGC 869, NGC 1528, M36, M37, M42, M43, Neptune (probably), Uranus, Venus, Saturn and the moon.
This was great. I can’t imagine what things would look like at a dark site. And I’m also looking forward to getting the UPS packages containing the polar alignment scope, t-ring, camera mount and 2x Ultima Barlow so I can practice putting a shine…or at least a rough sanding on these beauties in the sky.
Hmmmm…it probably wouldn’t hurt to spend a couple bucks on a notebook instead of tucking all these loose sketch sheets around my desk. 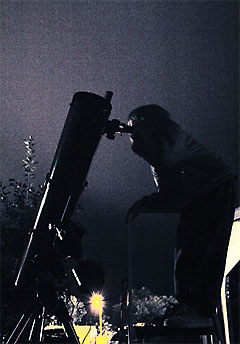