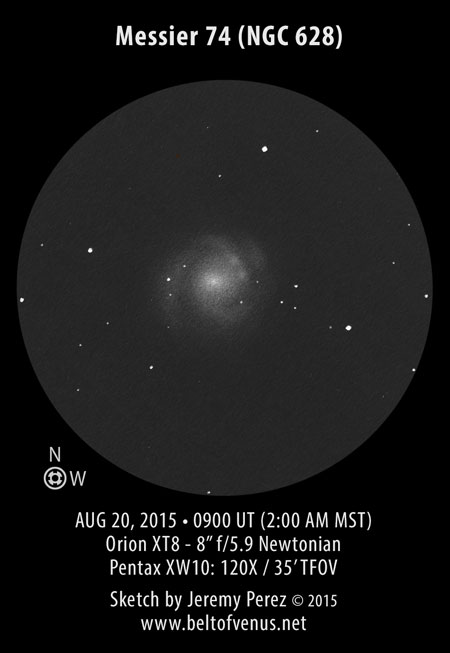 It’s been nearly 11 years since I first observed and made a very simple sketch of M74 in 2004. Because it is seen face-on and has a low surface brightness, it is considered one of the more difficult Messier objects. When I first observed it with my 6-inch Newtonian from Wupatki National Monument, I made note that some mottling was visible–but definitely not shown in the sketch! With the 8-inch Dob and a bit more galaxy practice since then, I was really hoping to pick it apart.

Beyond the soft, diffuse glow and concentrated core, the first irregularity I noted was that the brighter central section elongated preferentially to the northwest. Next up, a dip in brightness on the east side of the core, stubs emerging from north and south, and more subtle patches on the northwest side helped define interesting structure.

This is also the subject of the “Object of the Month”/”Sketch It article” in the October 2015 issue of Astronomy Now. 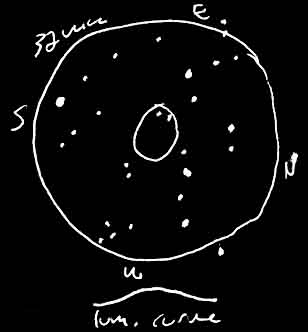 This was the 2nd of 2 galaxies I observed the night of an observing trip out to Wupatki National Monument, north of Flagstaff. It was a large diffuse galaxy. The core was on the verge of being stellar, but I don’t think I had enough aperture to make it out. It seemed to be elongated west to east and had a slightly mottled appearance.

M74 is a spiral galaxy that is 30 to 40 million light years away and is receding at 793 km/sec. It is roughly 95,000 light years in diameter, which is about the same size as our Milky Way Galaxy. The beautifully symetrical arms of M74 are salted with clusters of young blue stars, and pink emission nebulae. It was found by Pierre Méchain in September 1780. He reported the discovery to Charlse Messier who included it in his catalog in October 1780.