The full Moon was rising on a clear evening with fresh snow on the ground. I knew Sunset Crater would be in top form, veiled in white, with the Belt of Venus framing it beautifully. I wasn’t sure whether the moon would be in good position to add the finishing touch. I gave it a shot anyway—it was a learning opportunity. The Moon was not in a great location. At nine degrees up at 5 minutes after sunset, it was too high for a zoom view of the volcano with the moon in the frame. For the Bonito Park area, the Moon was also too far north for a good pairing. Next time around, I’ll need to look for a full moon that has the moon around 3-6 degrees altitude at 5 minutes after sunset. I’d also want the Moon at least 12 degrees further south—about 87 degrees azimuth.

So, after a little research in Starry Night Pro for sunset timings:

The next options for full Moon / Belt of Venus at Bonito Park / Sunset Crater are:

For other opportunities, some good full Moon / Belt of Venus pairings in northern Arizona:

And a couple of the photos: 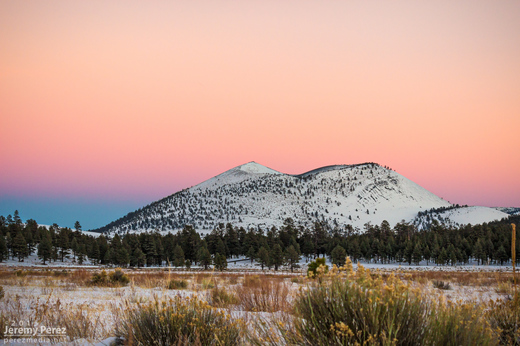 Snow coats Sunset Crater Volcano while
Earth Shadow and the Belt of Venus rise behind it.
Prints Available. 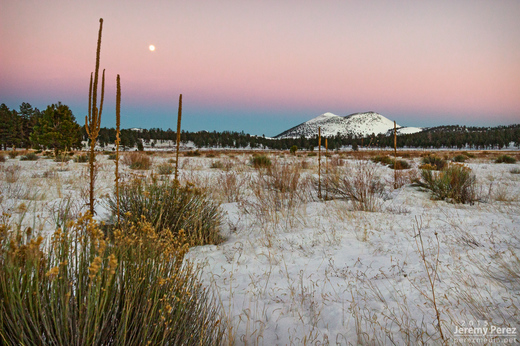 A wider view including the full Moon.
Prints Available.