After ten years with my Canon EOS Rebel-S/300D, I just upgraded to a new Canon T3i. First light last week consisted of a series of night shots down my street featuring Orion and a moonlit sky. Going from 6 Mexapixels to 18 is kind of startling, but one of the biggest benefits is Live View focusing. Pulling up a bright star on the LCD, temporarily magnifying 10X and then focusing into maximum sharpness is awesome. No more roughing in focus, exposing, reviewing the shot, delicately tweaking focus, re-exposing, re-reviewing, etc. etc. Auto noise reduction, and overall low noise at high ISO is also excellent.

Keeping the lens wide open at f/3.5 lets me drop the exposure down to 10 seconds & keep star trailing from being an issue. The trade-off is purple fringing on stars is pretty rampant at that f-stop & processing that garbage out of the image kills some of the star color. Color is a lot better around f/7.1, but then I need a longer exposure and get trails. 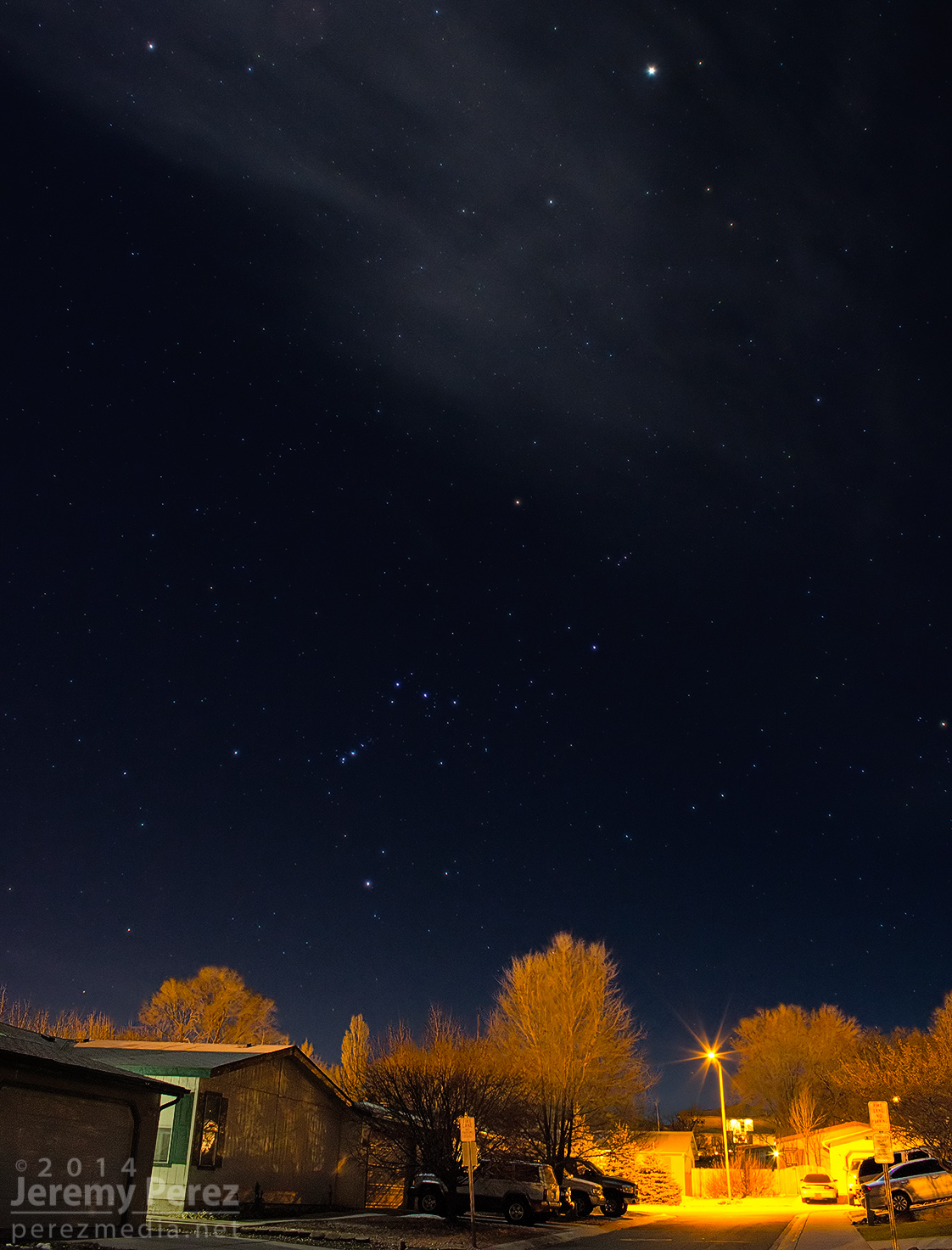 On Monday night, I drove out to Sunset Crater National Monument to brew up some sketches and decided to give the T3i a panorama challenge before starting the drawings. During the course of the observing run, I noticed the sky was deteriorating gradually, with a smooth haze. I kind of thought it was air glow related. As I was processing the set of images later, they confirmed that air glow was on hand, with a sturdy, green glow showing up beneath the arch of the Milky Way.

The panorama I shot is composed of 17 separate images. Each image shot at 18 mm, f/3.5, 10 seconds, ISO1600. Photoshop has major grievances with stitching together astrophotos and low contrast cloudscapes and that kind of thing. It’s really frustrating. So I tested out a bunch of pano/stitching apps, and the one that I had actual degrees of success with was PTGui. It grabs focal length from EXIF, lets you set matching control points across different image pairs so the software knows what to line up, offers alternative masking opportunities, you choose your projection style, and tons of preferences I haven’t even glimpsed into.

If panoramas weren’t such a pain in the neck to shoot & process, I’d almost want to do 2 sets of shots: f/3.5 + 10 seconds for luminosity, and then merge with f/7.1 + 20 seconds for color. Not happening on panorama stuff I’m pretty sure.