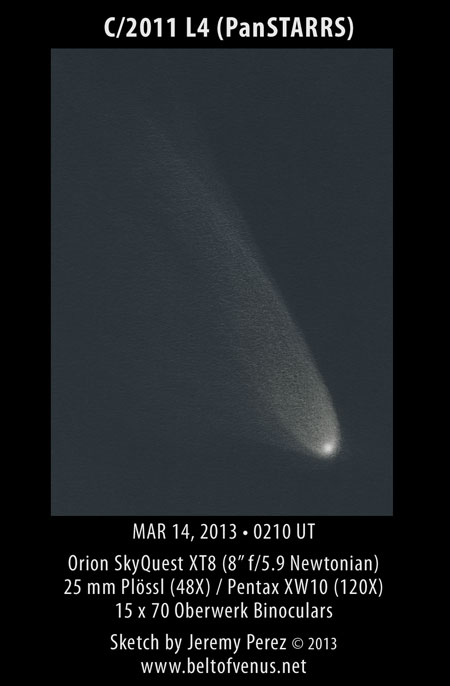 In the two nights since I last viewed the comet, it’s elevation has risen enough to pull it further out of the twilight glare. And it looks GREAT! The view got better and better as twilight deepened. The tail seemed to nearly double in length since I last viewed it—approaching what I estimate to be nearly a degree long. This time, I also noticed a graceful curve to the tail. The short, fainter extension on the south side was more obvious than last time, and I also detected hints of a fainter, straight streamer along the curved, northern edge of the tail. I think the ion tail is too faint to see, so I wonder if this is some extra definition in the dust tail. The comet was also easily visible naked eye, and this time the tail gave the naked-eye view a slightly smeared shape.

My daughter came with me and we switched back and forth between binoculars and the telescope while I shot photos and sketched. The lot on McMillan Mesa was loaded with people and their binoculars, cameras and a couple other scopes. We shared the view with a couple other folks parked nearby before the comet finally set, a warm copper brush stroke diving into the trees. I watched the tail gradually fade away for another minute and a half afterward. We finished by having a look at M42, Jupiter, the Pleiades, a few constellations, and of course the stunning crescent moon, lit by Earthshine. 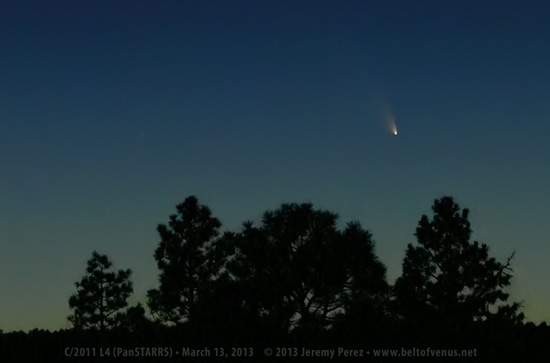 C/2011 L4 (PanSTARRS) burns over the trees on McMillan Mesa.