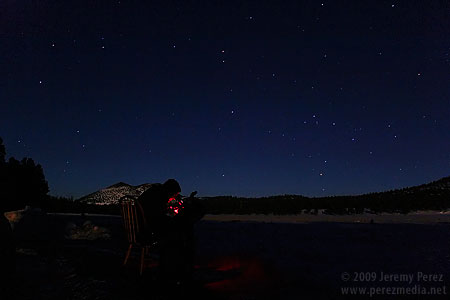 Some lively discussion erupted recently on the Amastro email list about what constitutes a proper astronomical sketch. The spark for the conversation was this remarkably detailed sketch of M101:

Although the example sketch is posted to Wolfgang Steinicke’s site, this is not his sketch. It was made by another observer using a 68 mm refractor and shows highly detailed spiral structure.

Most participants in the discussion counted themselves skeptical (myself included–although I’ve only been lurking). However, some commenters seemed to actually be quite agitated that the such a detailed sketch had been presented as an observation through a 2.5-inch scope.

The discussion raised some broad points that I’ve been chewing on and want to write about here:

The Limits of Visual Observing

While I count myself skeptical of this sketch, I still wouldn’t feel qualified to say absolutely no way did the observer actually see that. It made me think about the spectrum of observational certainty–from Glaringly Obvious (naked eye view of the full moon at zenith on a clear night) to No Stinking Way (naked eye view of Neil Armstrong’s footprints on the floor of Mare Tranquilitatis). Somewhere in the middle of that is the fuzzy barrier between observable and not observable. Anyone who’s observed for a while knows the placement of that hazy line varies based on a combination of all sorts of factors–optics, quality of the observing site, weather, sky glow, experience, patience, personal physiology, fatigue, mental state, and on and on. I know that line definitely varies for me from one observing session to the next, based on all sorts of things for which I don’t keep metrics.

If many, or even all possible factors are in your favor on a particular night, there are some wonderful things to be seen. If indeed all factors are cranked as high as they can go, could you see marbled spiral structure in M101 through a 2.5 inch scope? I’m still pretty skeptical…but maybe an individual’s eyesight, experience and perceptual abilities are far enough above the norm that they push the line of observational certainty into a realm that other experienced observers simply cannot relate. It’s that tiny sliver of possibility that keeps me from dogmatically saying, “no way.” So: ‘improbable’? Yes. ‘impossible’? Not willing to bet on it.

On the other hand–indeed, the hand that at this very moment is getting cut by Occam’s Razor–there are a couple of more likely scenarios. The second one is pretty cynical, and I don’t like listing it, but still, it’s a possibility:

The first option seems fairly likely. From what little I know, it would feel presumptuous to consider the second one.

Speaking from personal experience, I observe in a location that provides great viewing opportunities–true dark skies and high altitude. That gives me an edge that I really don’t deserve, but it’s there. I’ve observed objects and structures with my 6 and 8 inch telescopes that have been a huge challenge for other observers. In particular, I made a couple observations and sketches of the Horsehead Nebula a few years ago that inspired some observers, but made others roll their eyes in disbelief. I recall reading a thread over in the Stargazers Lounge forum where a commenter, who is apparently quite experienced, built a fortress around the reasons why my B33 observation made through the 6-inch scope was impossible. I didn’t participate in the thread–just read through it, and realized observers, even experienced ones, can draw a line of impossibility around things that simply aren’t true for everyone.

Which leads me to–

Astronomical Sketches Are Not Peer Reviewed

The M101 sketch discussion generated some passionate comments about how observers should treat their sketches–that is, with the utmost quality control, scientific objectivity, and self-criticism. I was a little flustered as I considered this. Although I try to apply those qualities to my sketching process, I do so because it’s what _I_ value and how _I_ choose to do it. It’s what I think is best for my goals and for those with whom I interact (and I’m not saying I always get it right). However, others may have different goals and processes in mind. For some, the pursuit of amateur astronomy is not about science and metrics and pedantic minutia. My experience is that a lot of observers engage in it for fun, diversion, gear-heading, socializing, spiritual stuff, whatever–if they sketch along the way, and maybe even dare to share their sketches, their work may not be even close to accurate. Heaven-forbid, it might even be embellished. There is no central regulatory hub for the hobby of amateur astronomy. It’s impractical and unrealistic to think observers as a whole should be pushed and cajoled into conducting their sketching forays with a specific quality or validity system in mind.

It makes more sense to me that if an observer has an established standard of quality and accuracy for what they consider to be a useful astronomical sketch, that’s great! It’s a valuable sensibility. However, there’s a lot of sifting to do–particularly if the internet is where you’re doing most of your sketch-viewing. It’s a great big web, and every day it accumulates a wider and wider array of astronomical sketches of all sorts (which, by the way, I think is fantastic!). Practically speaking, I think the answer is already there: Anyone who is concerned about high standards in sketches probably already has a stable of specific observers, websites, and forums that they visit to view and compare sketches. I know that I have sites I visit for what I consider to be detailed, deep, accurate sketches, but I also visit and view others that may not be as accurate or reliable. In those latter cases, I’m inspired in other ways–by the passion or vision of the observer–and I enjoy those sketches as well.

On the off chance that you’re concerned one of your sketches will be pulled aside and dissected in an astronomy email list or forum, I have a last chunk of thoughts.

If you’re sharing your sketches with a few good buddies–you know them, they know you–there are probably no big worries about how you arrived at your finished drawing. On the other end of that spectrum, if you’re preparing sketches for publication, where they will be seen by a diverse audience, in a reputable publication, there will be an expectation that you’ve been honest and careful in your portrayal. Everywhere in between those possibilities lie club activities, forums, email discussion lists and personal websites. Depending on their focus, some of these will have more structured standards than others. For example, one group may frown on sketches created during video-assisted observing while another welcomes them. One group may enjoy sharing and discussing sketches that incorporate an element of whimsy, while another would find that idea completely off-sides. If you introduce sketches or impose personal standards that don’t fit the community, you may be in for a rough time.

On the more objective side of things, there are a lot of good reasons for sharing carefully crafted sketches–comparing details, seeking constructive criticism on technique, sharing the pleasure of a successful observation, providing a visual reference for others, and so on. However, one motivation that I think has great potential to lead to challenges, is the desire for positive feedback. It’s great to hear that others like your sketch or the results you got out of your observation. However, in group situations, I find that there tends to be a well-developed expectation of fair-play in the world of positive feedback. If somebody in the group is receiving kudos for a job well done, others in the group expect that person to be playing by the same rules as they are.

For example, some observers use a pre-printed star chart to plot the star field surrounding a DSO so they can concentrate on the object itself instead of expending loads of time on the surroundings. (I think is a perfectly valid technique, by the way, and I use it myself sometimes.) If you do this, how do you present your sketch to the group? Just something to consider: If you present it in a forum where people are in the habit of congratulating and supporting each other on sketching technique, it’s conceivable that you will be complimented on how accurately you portrayed the star field. In this context, if you haven’t indicated at some point how you arrive at your star fields, and it later comes out, some in the group may feel foolish, leading inevitably to hard feelings–rational or not. In contrast, if you share that same sketch with a group that isn’t in the habit of comparing and congratulating sketching technique and tends to focus on the merits of the DSO observation itself, it probably isn’t a big deal whether they know the way the star field was generated.

Likewise, if an observer makes a challenging observation and then fancies it up later with details they didn’t observe, before posting it to a serious observing group as an unembellished observational sketch, fully-justified Geeky Astro Drama and damaged sensibilities are liable to raise their gnarly heads.

It’s all just food for thought based on interactions I’ve observed. I’m open to criticism on this whole mess of ridiculously long sentence structure and likely smattering of straw men–please fire away! 🙂

4 Replies to “Sketching on the Threshold of Visibility”