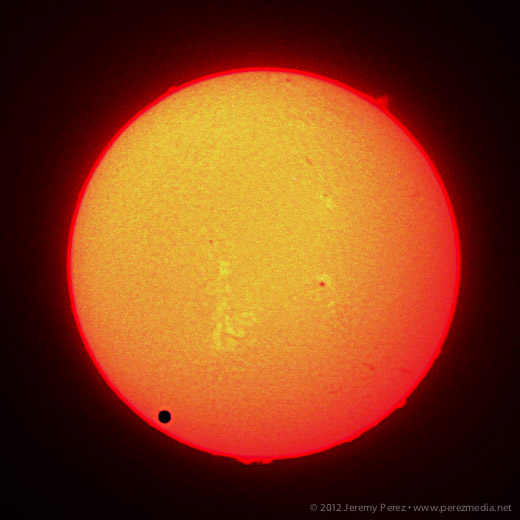 Wow! Two amazing solar events within a couple weeks of each other–Annular Eclipse and Venus Transit!

The first bookend Venus transit occurred during the summer of 2004, a couple months before I got my first telescope and actually started getting out to observe amazing events like this. So I missed it that one. Fortunately, the skies were clear over Flagstaff for the second bookend in 2012. We had a perfect back yard view from first contact, until the sun set behind Mt. Elden.

I had the 8-inch Dob set up with a Baader white light filter, and the PST for H-Alpha. Both views were excellent. I tried to get everything set up a couple hours early so I could test the cameras and start prepping sketches of the white light and H-Alpha features. The sun had loads of detail on display on both the photosphere and chromosphere–a whole mess of sunspots, prominences, and plage/faculae. So Venus had a wonderfully intricate backdrop to drift through. 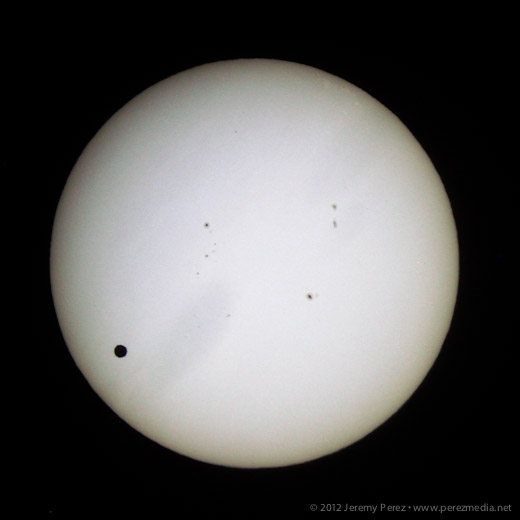 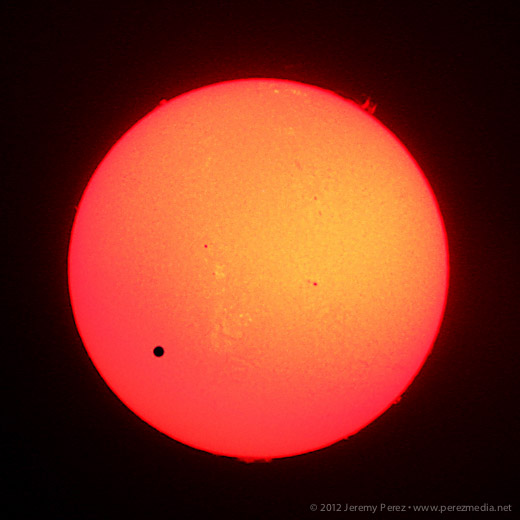 With all the back and forth between scopes and eclipse glasses, sketching, photographing, video recording, wiping dust off everything as the wind gusted, I was kind of scattered…which means I’m glad I had three and a half hours to try and get it right. I was working to finish up my H-Alpha solar disc drawing as first contact time approached, so I wasn’t completely keyed in to the exact moment contact. I first noticed the tiny bite of Venus at 3:07 PM (22:07 UT).

As it slid into the Sun’s disc, I looked for the aureole effect in white light through the Dob, and finally noticed a very faint, very thin hook of dull gray cupping Venus’ dark limb. That became two hooks, and finally a full but tenuous arc–more noticeable close to the limb of the sun, and less defined at the apex of the arc. It was a very subtle effect, and only visible intermittently when the gusting wind paused long enough for the scope to stop bouncing around. 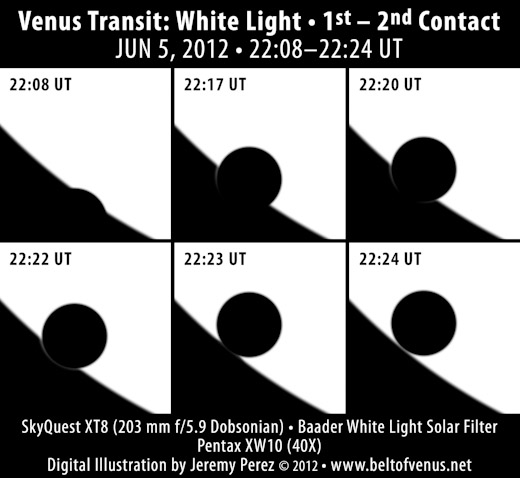 As Venus approached second contact, I looked for the black drop illusion, and noted about a 30 second period where the edge of the sun appeared to pull in toward Venus’ disc. This pulled-in region did not appear as solid as Venus–more of a very dark gray instead of black. I’m not sure whether the effect is created by sub-par optics, or if it is a purely visual trick, but it was fascinating to witness.

As Venus slid across the Sun, I used sunspot alignments to estimate its position at a few intervals. At 4:17 PM MST, as I was observing through the PST, I noticed that some of the plage on the preceding side of AR11498 looked particularly bright and crisp. I had not yet observed a solar flare, but thought this might be one, so I updated that section of the sketch and plotted venus on the solar disc at that point in time to capture my favorite segment of the H-Alpha view. The SolarSoft site shows that a C1.0 class flare was indeed occurring at AR11498 between 4:06 and 4:26 PM local time (23:06-23:26 UT). Pretty cool! 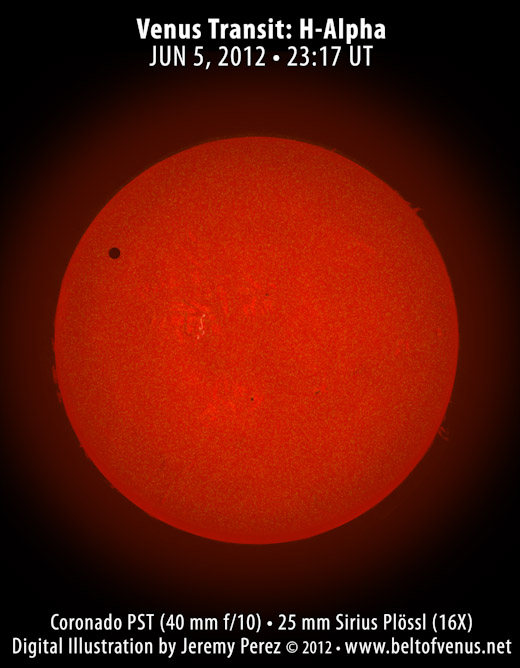 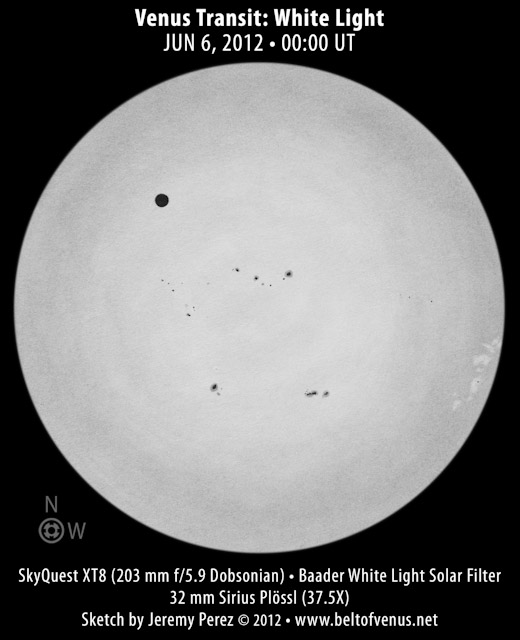 The eclipse glasses provided a nice view too, and showed the Sun with a small, black freckle on it’s northern hemisphere. 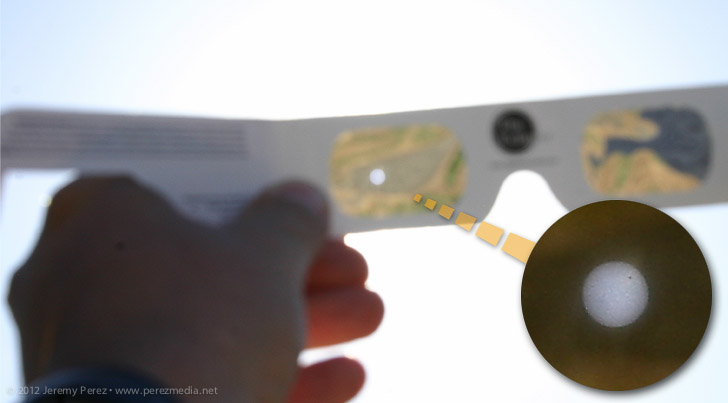 By 6:15 PM, the Sun was approaching the steep slope of Mt. Elden, and I had to move the scopes around to get clear of]]=some nearby trees. Elden’s silhouette was awesome–a couple gnarly ponderosas and an old broken snag managed to be in just the right spot to put a cool bite into the setting sun. I made the mistake of shooting a couple white-light photos of the silhouette and then hopping over to the PST to shoot some video. I should have just worked on the white light photos and gotten a full setting-sun sequence that I could have animated later. 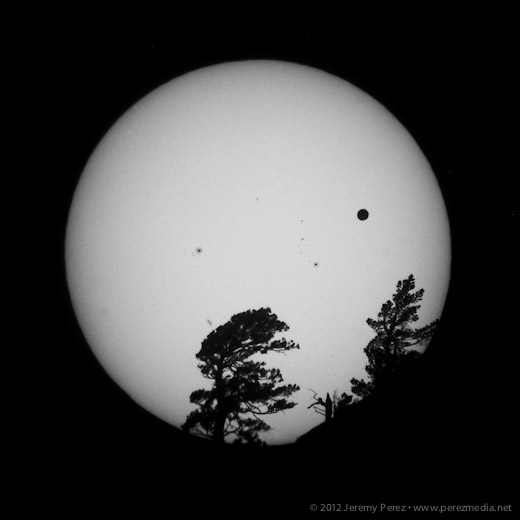 It was a beautiful event–I’m glad the sky cooperated. 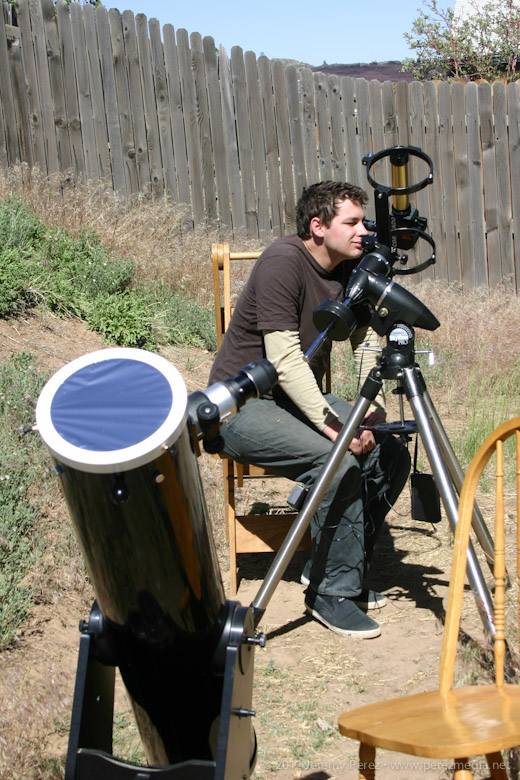 A friend, David Keller, pays a visit and takes in an H-Alpha view of the transit.